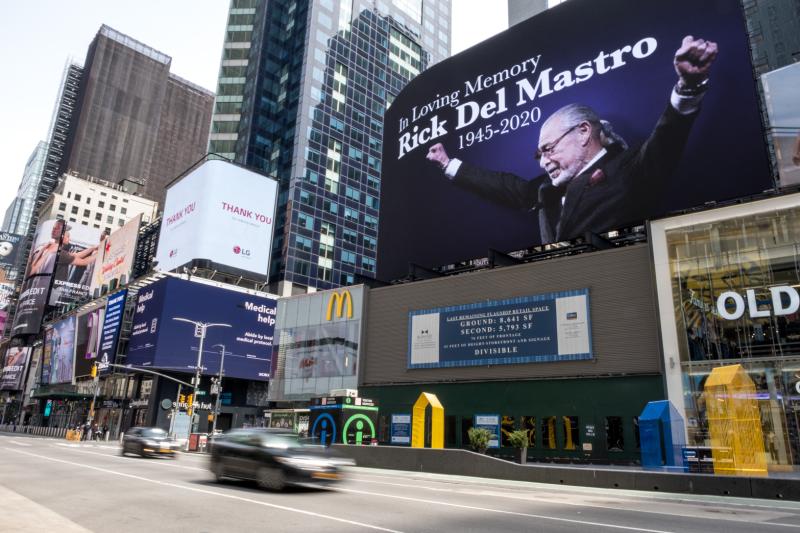 With deep sadness I report, that an industry Great, and a friend, Rick DelMastro passed away this past week after a long battle with corona virus.  The song that comes to mind is Heroes.  It’s as epic as he was.  He was a true hero in so many ways and he set his own path much like Bowie.  We will miss him dearly.  He was both an innovator in the industry, bringing new forms like “Metrolites”, “Wild Posting” and “Scaffold Wraps” to the forefront and also always an artist, practiced his “craft” with authenticity.  I am wishing his family peace during this incredibly difficult time.

I started off my week listening in on a zoom in which a college president was talking about contingency planning for kids not coming back to college this fall.  Pretty damn sobering stuff.  But then she mentioned some light in the tunnel, including a fellow alum, John Krasinski, doing some upbeat stuff.  Anyone else a fan of “The Office”?  If so, you should dial in his youtube news service called “SomeGoodNews”.  If you want to dive in, I would recommend here, where he interviews his old work colleague Steve Carrell: https://youtu.be/JNvpcGV1frQ

On other upbeat news, I read an email the other day that really struck home.  As I don’t think I could do it justice by summarizing, Although I think the line…”Never let a crisis go to waste”…is priceless, here it is in its entirety.

As many know, I was in PE for 20 years before spinning out in a fit of entrepreneurial craze to start BluWave. Every day since I jumped to the “other side” I’ve learned things I wish I knew before. This has never been more true than during these crazy days while viewing the world through the lens of the more than 350 PE funds that we serve. Here are some of the latest that might resonate:

Black Diamond Skiing: Call me crazy, but there’s some decent wisdom to be found in some of the 1980s comedies. I recently re-watched Better Off Dead with John Cusack and the paper boy who wants his $2.00.  In that movie, there’s a classic scene where John and his girlfriend, Monique, are at the top of a sheer cliff ski run. John’s character had never skied before and commented to Monique “Look at this! How am I supposed to live through this?”  Monique replied, “It’s no sweat, all you have to do is go down the mountain really fast.  If something gets in your way, turn!” She then proceeded to flawlessly navigate the cliff. John then said “What the heck,” tilted his skis, and promptly proceeded to tumble all the way down. But eventually he figured it out and 30 movie seconds later was skiing with the best of them. If you want a quick laugh, check it out. I feel like John Cusack right now at the top of the ledge and just jumped off!

O-O-D-A Loop:  Better Off Dead got me thinking about other times when people jumped off a ledge without explicitly knowing how to make their way down. Which got me thinking about Colonel John Boyd who came up with the OODA loop: a framework that is credited with being a central tenant of our air combat doctrines and a basis for our strategy during the Gulf War. It, essentially, sets forth that the victors will be those who most agilely Observe, Orient, Decide, and Act, and then iterate in rapid succession. This strikes me as a good framework for the now. The last few weeks, most of us have been in Observe and Orient mode. My guess is those who start deciding, taking action, and actively iterating first will likely have a strategic advantage as this fog lifts. Think about your business in this same way and encourage your clients to do the same.

Never let a Crisis go to Waste: I have to thank Rahm Emanuel for this one. Out of this craze will undoubtedly rise opportunity. Don’t wait for destiny to control you and wait for deal flow to naturally come back. Our most proactive PE clients are looking for ways to view this as an opportunity, whether it’s finding talent, resetting cost functions, or making acquisitions. Some of their top gripes are a) there is no deal flow right now and b) their investment bankers seem to be sitting on the sidelines and not proactively bringing ideas. If you have capacity within your teams, I would strongly encourage you to look at the portfolios of your best clients and urgently start mapping acquisition ideas and use your own networks to proactively make buy-side engagements happen.

Karma School of Business:  Right now we’re spending most of our time doing what we can to help companies out without looking for anything in return.  Many in our network are doing the exact same thing.  We’re fortunate to have a lot of problem solvers in our mix. Let us know if there is anything we can do to be helpful to you during this N=1 time . . . which, “too, shall pass!”

And finally…yes, you have read and heard about it many places over the last couple weeks.  All of the healthcare workers out there can not be appreciated and commended enough.  I couldn’t agree more!  But when I read the following quote in the NY Times Magazine this past weekend, my appreciation and commendation rose to new heights:  “We are accustomed to hearing the fight against this virus described as a war, but even soldiers are not asked to put their families at risk when they go into battle.”