Why We Put Up That Billboard…Funny You Ask

Why We Put Up That Billboard…

Amy Jones’ subject line said, “Why We Put Up That Billboard… Funny You Ask…”

Being ever vigilant but never suspicious, we decided to risk it and open the email. How could we resist an opening comment like that?   The email had a photo of a #billboard whose copy read, “We bought this billboard so Gordon McKernan couldn’t.  The reference to Gordon McKernan was lost on us.  At the end of this post we’ll enlighten you who McKernan is.

Amy had us at “We bought this billboard…”  A self promotion on a billboard was enough for us to bite and publish. Her story telling grew stronger with phrases like, “changed the landscape for a month,” (Isn’t that what we do? Change the landscape with OOH?) “Life is too interesting to take it slow and safe,” and “collaborate over cocktails.”  Her comments, together, in the intro email, is sure to capture the attention of the elusive of new business prospects.  Poke around in social media at Amy’s LinkedIn profile, you’ll read more specifics about the success and website traffic the #OOH generated.

Read her email below.  We like her story and are happy to give her space with OOH Today.  Though, I am not sure why she would want it.  We are a sucker for these kind of stories. Thanks Amy Jones.

Don’t forget to scroll to the bottom for the Gordon McKernan reveal.

Who is Gordon McKernan? An attorney who buys tons of OOH in Louisiana! 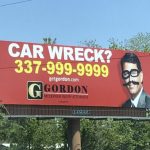 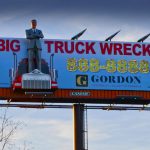 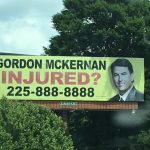 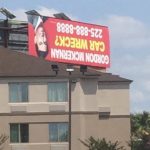 Off the Billboard Catwalk