When is 1 Billboard Equal to 3 Outside Ebbing, Missouri? When its Outside House Speaker Paul Ryan’s Office in Janesville, Wisconsin 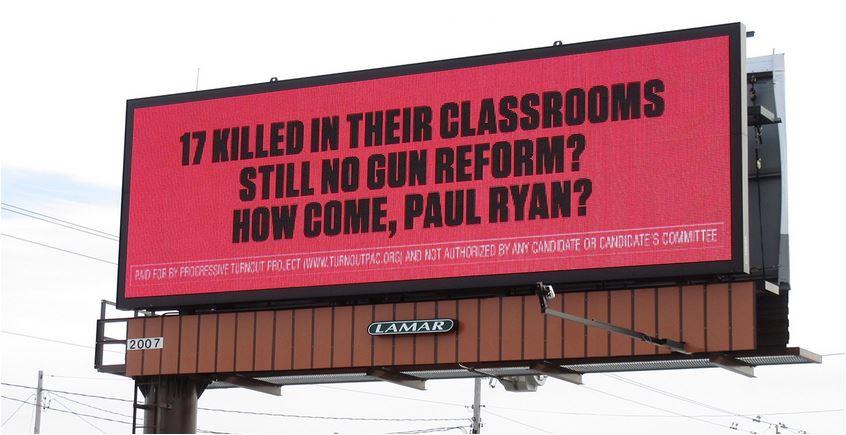 The real power of Outdoor Advertising has finally emerged.  A single billboard ‘campaign’ quoted as  “mirroring” the 3 Billboards Outside Ebbing, Missouri movie story, now carries the weight and force of 3.

When is 1 Billboard equal to 3? When its outside House Speaker Paul Ryan’s office.  A ‘campaign’ purchased by the Progressive Turnout Project (PTP), a Democratic Political Action Committee (PAC) is an attempt to call out and hold Speaker Ryan accountable.  PTP strategically planned and placed one digital segment, on one digital bulletin  with one 6-8 second segment and similar copy as the 3 Billboards Outside…campaign.  The one segment, one billboard is located outside of House Speaker Paul Ryan offices in Janesville, Wisconsin.

The PTP PAC is attempting to scandalize House Speaker Paul Ryan for not proposing legislation in the wake of another deadly school shooting.  The message on the digital billboard, is  “17 killed in their classrooms.  Still no gun reform?  How come, Paul Ryan?”

Office of Baby & StreetEasy ‘Find Your Place’ with OOH