The Law and The Prophets—OOH Investors The Golden Rule

What Now for Clear Channel?

What Now for Clear Channel Outdoor?

Billboard giant Clear Channel’s owner, IHeart Media (primarily a radio operator) has filed for Chapter 11 bankruptcy, blaming the monster debt load of over $20 BILLION incurred in a private equity buyout around the time of the financial crisis of 2007. It seems most of Clear Channel has been gasping for air over the last 10 years, as part of the drowning debt. Subsidiary, Clear Channel has not, so far, filed for bankruptcy.

There has been some talks that John Malone’s Liberty Media made an offer for IHeart’s radio. If so, Clear Channel Outdoor likely will have a different owner and soon.

Personally, I do not want to see anything go badly for the Outdoor guys and gals.  There are still some good people left in the company who have earned and deserve the best outcome. Keep in mind, Chiefs get shot (figuratively of course) and working Chiefs and Braves keep their jobs. That is why I have always been an advocate of General Managers keeping a list.  Back to the news.

There are still some good people left in the company who have earned and deserve the best outcome.

IHeart CEO Bob Pittman says: “The agreement announced is a significant accomplishment, as it allows us to definitively address the more than $20 billion in debt that has burdened our capital structure.”

Everyone that I knew in the OOH business, at the time when Bain Capital offered the kind of dough, $26 billion, for the iHeart (called Clear Channel at the time) buyout agreed it seemed a big stretch, even without the financial crisis in sight.  It was too much money.  Bain Capital obviously didn’t. Then, when the financial markets collapsed, too late.  Bain’s lenders tried to back out and everyone went to court to terminate the deal, yet the court forced the buyout to be completed.  The $43 million each in transaction fees to the owners probably seemed like a lot of money to them then for completing the deal.  What percentage fee is significant to $26 Billion?

The Golden Rule and who could be smarter than Bain Capital? 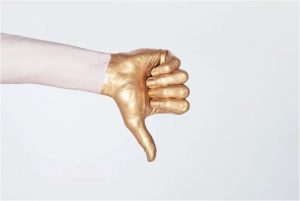 The biblical Golden Rule, “do unto others as you would have them do unto you” (Matthew 7:12).

When one has as much money under management as Bain does, few question their wisdom.  Big money guys are quick to vacate any voices at variance to their financial goals and projections with what they refer to as ‘The Golden Rule’.  I have heard ‘The Golden Rule’, since the early days in 2000, when many mergers and acquisitions were taking place.  Generally speaking, the private equity guys getting into OOH, often looked at us Billboard guys as not very bright.  They were going to mosey on in and show us how to make money in the Outdoor Advertising business. OK.

To be fair, it’s not just OOH they misjudged. The Boston private-equity firm were the lead investors in three leveraged buyouts Toys ‘R’ Us, iHeartMedia and Guitar Center.   If you have had your head up, away from the NCAA Tournament (check scores on the link) and not buried in your billboard work, you would know that each of those 3 aforementioned companies experienced a financial collapse in recent days.  Tough sledding.  And all that snow in Boston this year too.

Oh, almost forgot to share ‘The Golden Rule’, so often from the investors who were new to OOH?  “Remember the Golden Rule! Whoever has the gold, makes the rules!!”

Remember the Golden Rule! Whoever has the gold, makes the rules!!

Yes, seriously!  Cartoon aside,  The Rule was exercised when experience in Outdoor Advertising ran incompatible to their projections and sales forecasts. I guess that works for your employees if they want to keep their jobs. 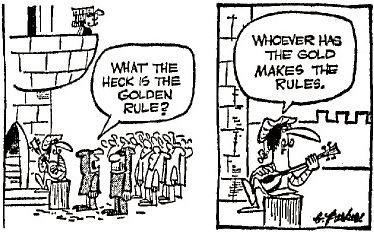 What the Golden Rule crowd forgot, the market makes the rules.  “The law and the prophets”

the market makes the rules.

More on personal observations and experience in another post regarding some of the rules of the market which investors often chose to ignore while freely applying The Golden Rule. Yes, they had specific rules which made up The Golden Rule.

OOH TODAY believes all voices, not just the loudest, must be heard 4721 posts 606 comments