Atomic Props & Effects has been the hands down Out of Home leader in providing creative and innovative extensions, embellishments, effects and props of all types and sizes for our Industry for the last 40 years we have been in the OOH business.

If you missed it, the OBIEs held their award ceremony online this year, and we had some projects take home awards! The OBIE awards are a great example of how powerful, versatile, and creative the Out of Home advertising medium can be. Right now, we all need a reminder of how far this industry has come and how we can build on the successes from last year. We hope these projects will help brands use OOH to their advantage as we work towards a healthier and more inclusive future for all. 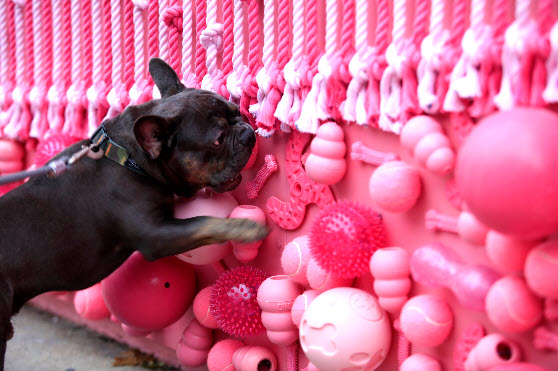 Our client’s internal research revealed they had a niche audience, dog owners. Atomic fabricated a custom 3-D buildout with 910 dog toys attached to the 90’ long by 13’ tall installation. The wall mural was painted to look like tons of dogs were running to play with a box of toys that had been tipped over. The mural included a QR code for dog owners to either download the Klarna app or view a curated list of dog toys for purchase. The mural was placed just outside of a dog park and of course, every dog that walked by had to check out the toys. The dog owners shared their experience on social media, furthering the reach of this campaign. 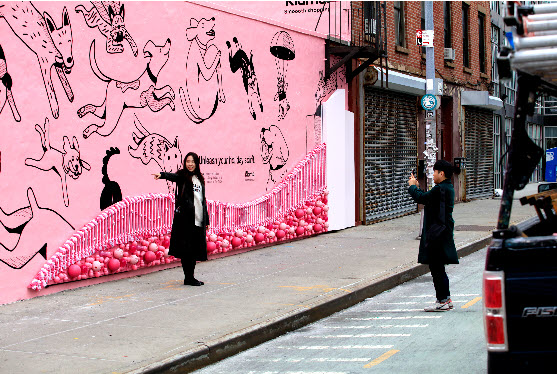 Our in-house research and development team (the Atomic office dogs) proved that this installation would be a hit on the streets of NYC. The results Dash Two was able to generate from the campaign was exciting. According to Geopath, the installation generated an average of 178,407 weekly impressions among adults over 18. In total, the campaign generated 713,628 impressions, 82% of those who saw the mural were dog owners.

We had tons of dog toys leftover from fabrication so we donated all the extras to foster organizations and humane societies in the Twin Cities.

Clients:
Dash Two – Sourced and purchased media space and reached out to us to bring the dog wall to life.
72andSunny: Generated the creative and illustration
Overall Murals: Painted and installed the mural 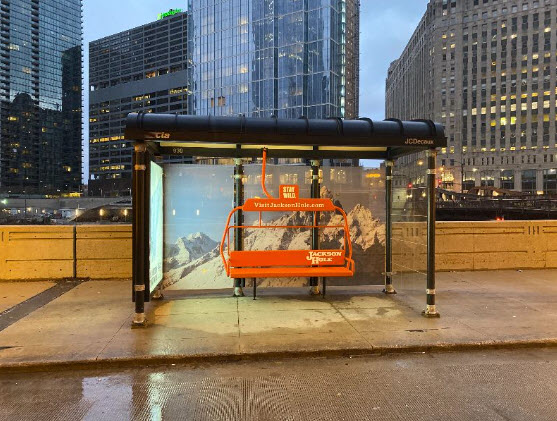 We love a fun shelter seat replacement. This one we fabricated for Jackson Hole Tourism replaced the standard bench with a chairlift. The seat replacement met all of the shelter requirements from JCDecaux. 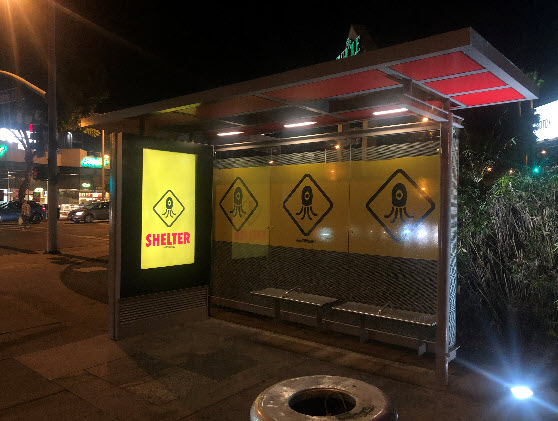 HBO wanted to generate media buzz for their upcoming show, Watchmen. They had a nationwide digital and OOH campaign but wanted to enhance their OOH campaign with a one of a kind activation. A scene from the show depicted squids raining on the city. We designed a custom coded, Augmented Reality experience that fit into a traditional transit shelter ad box. The AR effect was to make it look like squid were raining on the city in real-time. The program was also designed to interact with cars, people, and other objects. The squid would splat on taxis and people passing by.

Watch the video to see the full AR experience below

What can you take away from these award-winning advertisements?

• Think of ways that you can indirectly reach your audience – Klarna’s interactive wall attracted dogs which then attracted their owners to the mural. Would they have taken a second look at the mural if their dog wasn’t begging to play with the toys?

• Things like a simple shelter seat replacement can give pedestrians a taste of the full experience a brand is offering. Visit Jackson Hole could have just gone with the standard vinyl advertisement but putting in the extra effort to have a custom prop made will grab attention and be more easily remembered by consumers.

• Your brand has the opportunity to give consumers an experience they can’t get anywhere else. Augmented Reality is a highly engaging but underused technology in OOH advertising. HBO’s Watchmen used AR to immerse fans into an iconic part of the show.

Here is How OOH Went to the White House and Congress