Here is How OOH Went to the White House and Congress

The White House stays isolated from any OOH

A message from Movia 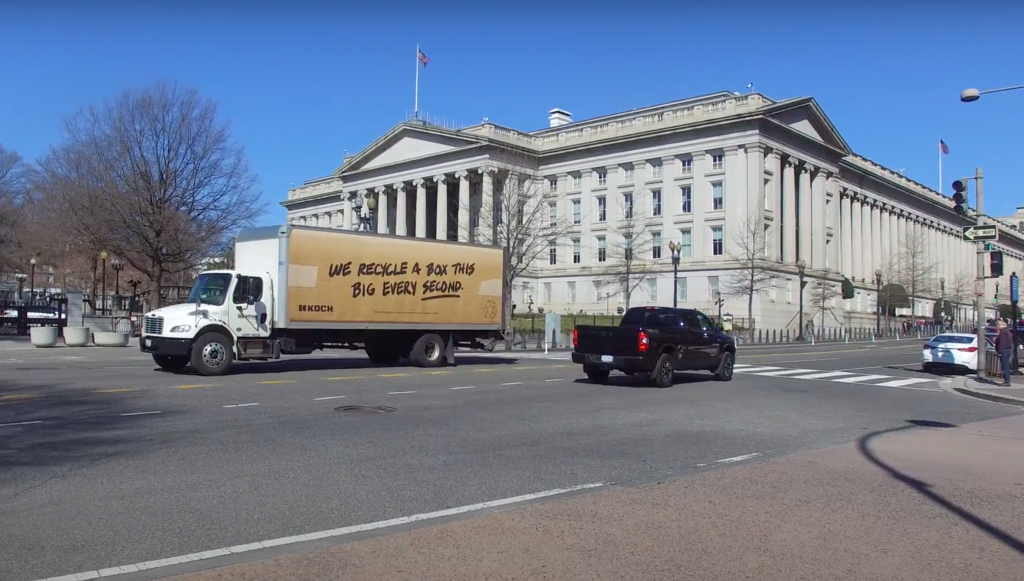 Koch and Movia Hit the Road in DC and Atlanta

Teaming up with Movia, a data-driven truck-side advertising company, Koch Industries launched a high-impact mobile out-of-home campaign in Washington, DC and Atlanta, Georgia. Over 14 weeks and using only 10 trucks in each market, the partnership generated 112 million impressions.

Founded in 1940 and based out of Wichita, Kansas, Koch Industries is one of the largest American multinational corporations operating all over the world. They manufacture and distribute products in a variety of industries including, but not limited to, polymers, automotive parts, and electronics. Koch is also the second largest privately held company in the United States and had a reported revenue of $110 billion in 2018.

Despite its small size, Washington DC needs no introduction. The legislative capital, home to over 700,000 people, is a microcosm of historical buildings, government agencies, foreign embassies, shopping centers, and central business districts. At every street corner, you are sure to find the headquarters of powerful banking and health organizations, including the International Monetary Fund and the World Bank. In DC, Koch knew that their campaign could reach the eyes of important decision makers, corporate executives, and millions of international tourists.

Likewise, Atlanta is home to any multinational corporations in various industries like Coca-Cola, the world’s busiest airport, and more than 30 colleges and universities. With 5.8 million residents and over 50 million annual tourists, the ATL is another attractive OOH hotspot.

The issue became, however, that neither market had adequate OOH real estate available to launch a campaign that would get in front of Koch’s target audience. In DC specifically, the lack of OOH options available is largely due to the city’s strict regulations that preserve its pristine appearance.

Since 1931, Congress and the Department of Consumer and Regulatory Affairs (DCRA) have banned, restricted, and removed “billboard blight” throughout the city – with sandwich boards and signs exceeding 1 square foot in area, even, requiring permits. With more recent amendments, public transit advertising in common spaces became out of the question for businesses too.

Regarded as a royal pain in the ass, by the advertising industry, these zoning laws mean that areas near iconic landmarks remain relatively untouched OOH territory. Despite years of painful attempts made by advertising giants to operate around these barriers, the White House stays isolated from any OOH.

In light of the recent global push toward climate action, Koch Industries wanted to spread the word about their sustainability efforts, but with a medium that matched their message. Using third party delivery trucks that Movia partners with – which were already on the road for other purposes – the campaign created net-zero emission pollution.

Given data on who saw their message during varying times of the day and at different locations, the billboards were driven directly to Koch’s key destinations. Everyone, from prominent DC workers to global tourists, wanted to know more. Truck drivers themselves became brand ambassadors, handing out campaign flyers with more information about Koch’s core message.

Koch’s execution was the perfect solution to amplify their results in areas rarely opening to massive full-scale OOH campaigns.

The views, thoughts, and opinions expressed belong solely to the author, and not necessarily OOH Today.