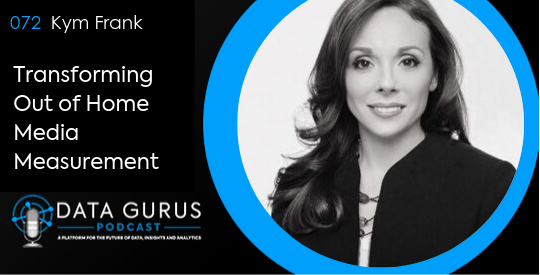 “It’s one thing to measure impressions, but measuring the probability that a consumer will see an impression takes it to the next level. Today, Sima and Kym Frank, President of GeoPath, have an intriguing discussion about the “next level” for out-of-home advertising – we’re even talking about virtual reality and eye-tracking studies to understand viewership. It doesn’t get any more fascinating than that!” —Sima Vasa host of The Data Gurus podcast.

The President of Geopath, Kym Frank, sits down with Sima Vasa for today’s chat.
They discuss the history of Geopath, how they use eye-tracking studies, and location data

The Uniqueness of Geopath

Their core organizational mission is two-fold:

It could be the size, the angle to oncoming traffic, many different factors that drive a person to make eye contact. Not everyone who walks or drives by an ad will look at that ad, so Geopath is trying to be responsible about the way that they’re measuring the channel.

This will be helpful as out-of-home starts entering a more audience-based buying programmatic ecosystem, which is where we’re starting to migrate to, as a culture, today.

Out-of-home advertising is growing! It is the only traditional channel that is on the upswing, and there’s a few reasons for that. People are moving around in urban environments in different ways than they have before, more people are living in big cities and taking mass transit, and they are being exposed to opportunities to the channel more than ever before.

Harnessing the Power of Local Data

Geopath is overhauling the measurement system. The core is built in aggregated and anonymized location data from mobile devices throughout the entire United States. Geopath also uses information from connected car dashboards, specifically speed information. This is useful because if you pass a digital billboard doing 60mph, you’re only able to see a certain number of ads on that billboard, which rotate every 8 seconds. But if you’re stuck in traffic or moving a lot slower, you will be able to see more of those rotations.

These factors really go into play in Geopath’s measurement system, as they are harnessing new audience demographics, psychographics, and computer graphic information.

The information provided better enables them to target the kinds of consumers that advertisers are looking for, and makes them super-relevant for the consumers as they’re passing by.

The Buzz of Changing Behavior

Geopath anticipates more opportunities to approach advertisers with good stories about the people that they’re trying to communicate with, and in ways that they’ve never been able to do that before.

This should shift the way advertisers think about out-of-home, and it positions this channel as innovative and technologically savvy. As the oldest medium, it’s gaining a lot of buzz about how innovative the channel really is, and budgets are starting to migrate from other channels. Eventually, this is expected to cross both the national and local landscape.

GeoPath
Sima loves to hear from her listeners with input, questions, suggestions and just to connect! You can find her at the links below!
LinkedIn
Twitter
Infinity-2.com
Sima is passionate about data and loves to share, learn and help others that share that passion. If you love data as much as her, subscribe on iTunes and don’t forget to leave a rating and review!