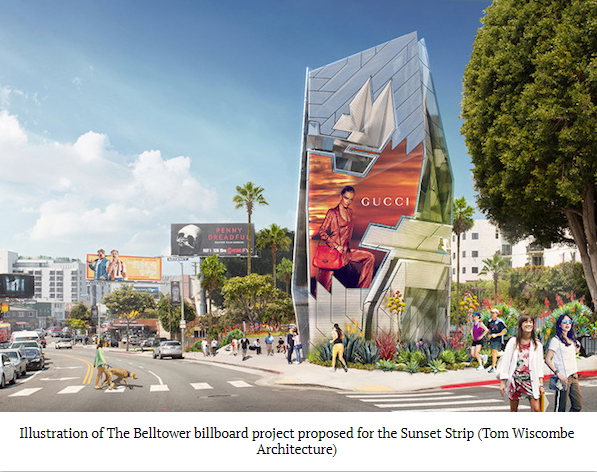 The Sunset Spectacular (aka Belltower) for Whom the Belltower Tolls.

Apologies to John Donne and Ernest Hemingway: Any billboard’s death diminishes me, because I am involved in all that is Out of Home, and therefore never send to know for whom the bells tolls; it tolls for thee.”

OOH Today stands in solidarity with Orange Barrel, supporting the building of the Sunset Spectacular or Belltower billboard, as it represents the future, embracing the interconnectedness of the #OOH Industry with the Local Community. It sets a higher standard of what signage can be. We believe it is our moral duty to support similar OOH projects.

embracing the interconnectedness of the OOH Industry with the Local Community.

We posted a story about the Sunset Spectacular 2 days ago, Monster Build in West Hollywood- This is Happening.  It is a spectacular Out of Home structure without peer under consideration in Los Angeles’  West Hollywood City (WeHO) and the infamous Sunset Strip.  Orange Barrel Media is the Out of Home company tabbed to build the proposed 72 foot structure on city owned property.

Monday night, ‘The Sunset Spectacular’,  already two and one half years in development, was considered for approval of a site license agreement to construct and operate a pilot digital #billboard on #WeHO city property.

As predictable as official municipal actions seem to be leading up to a vote, a delay occurred. A substitute motion for a friendly amendment was made which included among other items, reducing the size and mass of the proposed project.  The project will be delayed. More work on details need to worked out with West Hollywood staff, the Arts & Cultural Affairs Commission and Orange Barrel, before it returns to the Planning Commission, then back to the West Hollywood City Council for a vote.

The Belltower billboard represents a symbolic interconnectedness of OOH and Community.

The official report from the West Hollywood City Staff and Council Proceedings follows below. It includes a video of the minutes and shows the vigorous debate of the Council on the project and Orange Barrel Media’s presentation by CEO, Pete Scantland. The Council video is long, but the minutiae discussed is necessary in planning and executing a project of this caliber.  It is fascinating and edifying.  If you are an OOH owner you’ll want to view it!

The official report from the West Hollywood City Staff and Council Proceedings.

The West Hollywood City Council reviewed the Sunset Spectacular (aka Belltower) project at its meeting on July 16, 2018.  If you’d like to review the entire conversation, here’s a link to the video footabe (scroll down the menu and click on item 4A, or go to minute 53:29: http://weho.granicus.com/MediaPlayer.php?view_id=22&clip_id=3262

This is the staff report – this contains detailed information about the project and process.  The report had several attachments, which are linked under item 4A on the Council agenda, here.

The Council had a vigorous debate, as you will see if you watch the video.  Ultimately, their motion (official actions/direction) regarding the project was as follows:

Mayor Pro Tempore D’Amico made a motion to approve the item as presented, and the motion was seconded by Mayor Duran.

Councilmember Horvath requested a friendly amendment to the substitute motion to: 1) Direct staff to work with Orange Barrel Media to draft an item that will include the current proposal, and include as an alternative recommendation, the proposed revisions as outlined in the substitute motion, and present that item to the Planning Commission, the Arts & Cultural Affairs Commission, and then back City Council for discussion and approval.

The substitute motion with the friendly amendment passed, noting the “no” votes of Mayor Pro Tempore D’Amico and Mayor Duran.