Here is a campaign by the Finnish newspaper Helsingin Sanomat, using Outdoor advertising attempting to hijack the  #HelsinkiSummit. It is a sizable Out of Home expenditure. The campaign, by TBWA\Helsinki, used just over 280+ locations (I always have questions about an OOH Owner when they can not tell me exactly how many faces were installed) on billboards, posters and transit shelters on the route from the airport to the summit in an attempt to dominate and in the words of the Finnish press, “rouse the attention of US president Donald Trump and Russian president Vladimir Putin.”

Critics of President Trump argue, among many things, the President does not listen to or heed advice.  Yet the largest newspaper in Finland, placed serious OOH weight on the streets of Helsinki attempting to do just that. Did they influence or impact?

Click on the video below for ride along displaying  many of the OOH faces.

A. What was the newspaper (Helsingin Sanomat)  publisher’s objective?
B. How many of those objectives were met?

1. Rouse the attention of US president Donald Trump and Russian president Vladimir Putin
2. Influence the two Presidents
3. Show the newspaper’s support to fellow worldwide press colleagues
4. Raise the topic of the freedom of the press
5. Sell papers
6. Combination of all five above.

Regarding the questions A and B.
We are going with multiple choice answer number 6 for question A and 1½ for B.

The OOH buy was created in only a few weeks before the July 17th Summit. Outdoor companies Clear Channel and JCDecaux  partnered on the campaign. 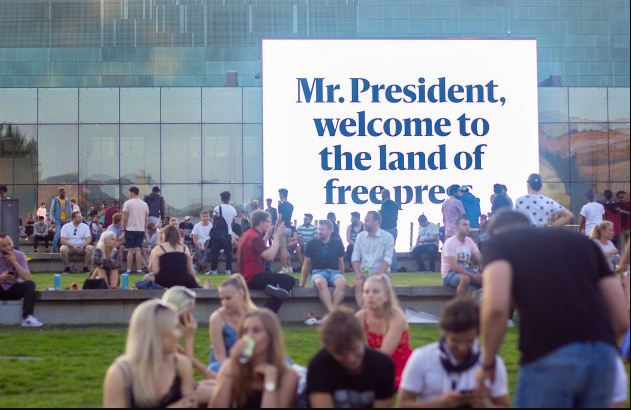 Read more at ⇒ “Mr President, Welcome to the land of free press”

OOH TODAY believes all voices, not just the loudest, must be heard 3405 posts 506 comments

Word to Your Moms