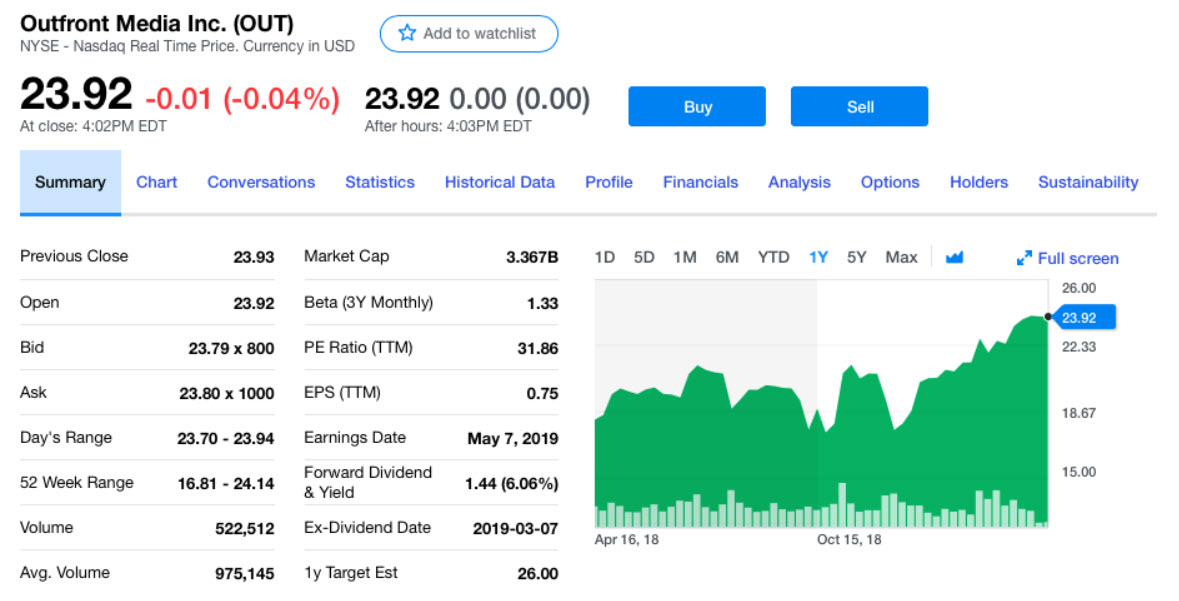 Should Facebook (FB) acquire Outfront Media (OUT)? An opinion piece.

These are the kind of game theory scenarios that constantly navigate in my mind. Can you imagine an industry where Internet tech giants start acquiring and investing in traditional OOH media companies? Well, it has begun.

My sentiment is that digital signage and out-of-home related M&A and investment activity will intensely accelerate from this point forward.

In the past months, important investment deals started to flourish,
a few to highlight:

Some of my readers might be perplexed on why I am writing about stocks and investments instead of AI, analytics, and innovation; I promise, the dots will connect.

Earlier in my career, I was an avid equity investor, a member of the Investment Committee at The Breakers Palm Beach, and eventually worked at Morgan Stanley Smith Barney as a full-blown registered stock broker and advisor (obtained my Series 7 & 66 licenses). My sweet spot was identifying technology market trends that were destined to explode, and then invest in those tech companies best qualified to monetize on the exponential growth. Some of my most rewarding recommendations were Alphabet (GOOGL) at $305 a share, Microsoft (MSFT) at $17 a share, and Facebook (FB) at $27 a share. Obviously, not all my hypothesis turned out this profitable, but what I fine-tuned was identifying these market movements before the masses did.

Digital signage, outdoor advertising, and those tech companies serving the industry will be one of the most coveted assets to invest in, it will become a key category. This notion was the key reason why I quit my trading career in 2011 and decided to launch an AI company in a very legacy-focused #OOH industry; but I went all-in based on that conviction.

I believed that digital signage undoubtedly would require truth analytics, yielding, proof-of-performance, and connected systems. How the pieces of the puzzle have ultimately come together (and are still arranging), was hard to fully predict, but the zoomed-out high-level story was accurate.

Throughout these years building AdMobilize, I have met dozens of industry colleagues that had a similar vision, ahead of the time. Some of these thinkers are executives at publicly traded and also smaller OOH companies, a few reporters, a handful of entrepreneurs, and also select media buyers.

It’s no longer a vision. It has arrived, our industry has entered its
“renaissance” period.

What happens if Google decides to jump head-on into DOOH?

What do you feel when you hear that sentence?

At this stage of the game these possibilities are becoming more credible and plausible. We need to be prepared, proactive, take risks now, and not wait until the “wall has come down,” (I had to, just watched episode 1, season 8 of GOT with my wife last night).

I often question why CPM’s in OOH and DOOH are so low. It offers one of the most creative, ubiquitous, innovative, memorable advertising mediums and yet, the CPM’s do not reflect the potential. I realize the many arguments for those in favor and against increasing CPM’s for the industry. Within that tension exists a vast opportunity. It is inevitable that all these technological advancements in digital signage will keep moving the needle towards emulating many of the characteristics that enabled internet advertising to explode. Moreover, DOOH offers several benefits that online cannot provide and I think our industry can scale an evolved version of serving fraud-proof, anonymous, dynamic, and interactive ads. (I covered this in previous thought pieces on Medium). Actually, I believe that both online and offline industries can rise by merging more intricately — a typical “sum-of-the-parts” scenario.

I wonder what would happen to the industry’s average CPM if Facebook were to acquire Outfront Media and increase rates. My assumption is that the revenue meter would move higher in a fairly short amount of time, especially if the billboard’s faces were smart, AI-analytics enabled programmatic assets (accountable, attributable, addressable). Traditional OOH advertisers would complain heavily at first, but would eventually understand the arguments for the new CPM due to the many benefits this DOOH medium provides, and the rates should reflect accordingly. Furthermore, brands that only advertise online, will likely combine campaigns with the offline world as well.

Can you imagine the creative measurable possibilities this enhanced Facebook platform would provide in combining online and offline campaigns by owning Outfront? As per Outfront’s 10-K, 2018 annual shareholder report, OUT has 510,570 total displays (US and Canada) as part of their portfolio. Although only a small percentage are digital instead of static screens.

This is by no means an in-depth analysis, but instead the intention is to offer a provoking “thought seed,” where the reader chooses how and if to grow it. I’m using these two companies just to illustrate a point, feel free to replace the names with Google, Amazon, Netflix, Yahoo, Lamar, JCDecaux, Clear Channel Outdoor, Intersection, and so on.

Clearly, the above metrics highlight very different types of businesses.

OUT is a REIT, offering a generous 6% yield with historically limited stock price valuation increase. I think Wall Street would value Outfront differently if Outfront was more aggressive with acquisitions of tech companies that would support increased yielding and intelligence. I have always argued that billboard operators should also identify themselves as data companies. Regardless, Outfront has an incredible moat: half a million assets in prime markets. That is almost impossible to replicate. They are highly leveraged with $2.3B in various debt instruments, and have only $53M cash on hand as of the latest filings. Generating over $1.5B in sales with a profit margin of 6.7%. Overall a steady healthy business, with limited free cash, in a growing industry during a prosperous economic period.

FB is still a stock growth story, with 1.5 billion active users backed by a massive online advertising model. Lately, they have experienced intense scrutiny on data practices and pressures on transparency, which was needed and justified. Their moat lies in the ability to own a big chunk of the consumer online world and serve it with the latest ad tech. Remember that Facebook acquired WhatsApp (for $19B) and Instagram (for $1B), and over 70 other tech companies.

With a Buffett-like value investing hat, I would say both companies are well-managed, have proven leadership, and have moats. I am not going to elaborate on my views of their current valuations. But looking at Facebook’s healthy balance sheet, with $41B in cash, minimum debt at $500M, and a 2018 net income of $22B, an acquisition of Outfront would not shake the tree too much.

Why would this acquisition make any sense?

Personally, I was thrilled to see Netflix’s partial acquisition of Regency Outdoor. I believe it was a brilliant move. Imagine for a second if traditional transportation companies would have invested or acquired Uber, or Marriott had taken an interest in Airbnb, can you grasp those returns? Thus, I am looking forward to learning what the big names in our industry will eventually do. Will they play status quo? Or will they embrace lessons that some of the most valuable growth companies in the world have adopted? I realize there are no easy answers as every scenario is different but the fire has been ignited, as the investment community is realizing the truest potential of OOH and digital signage.

I have always thought charts to be deceiving, just change the time horizons and it demonstrates different performance outcomes. Always dig deeper into the financials, historical data, and shareholder letters. Think in long-term chunks instead of just “quarterly obsession metrics.” This is fundamentally important when understanding companies that trade in the public markets and sensing future market trends.

As we continue to pivot, learn, adapt, and collaborate, my recommendation is that we focus on zooming out and taking a long-term view to what is happening to our industry. Let’s keep executing and elevating with courage.

As we stand today, with all the market data at hand, all signs are pointing towards a very promising future for our industry. Let’s not rest on our laurels, let’s keep thinking outside the box, and sometimes our biggest threats become our most rewarding opportunities.