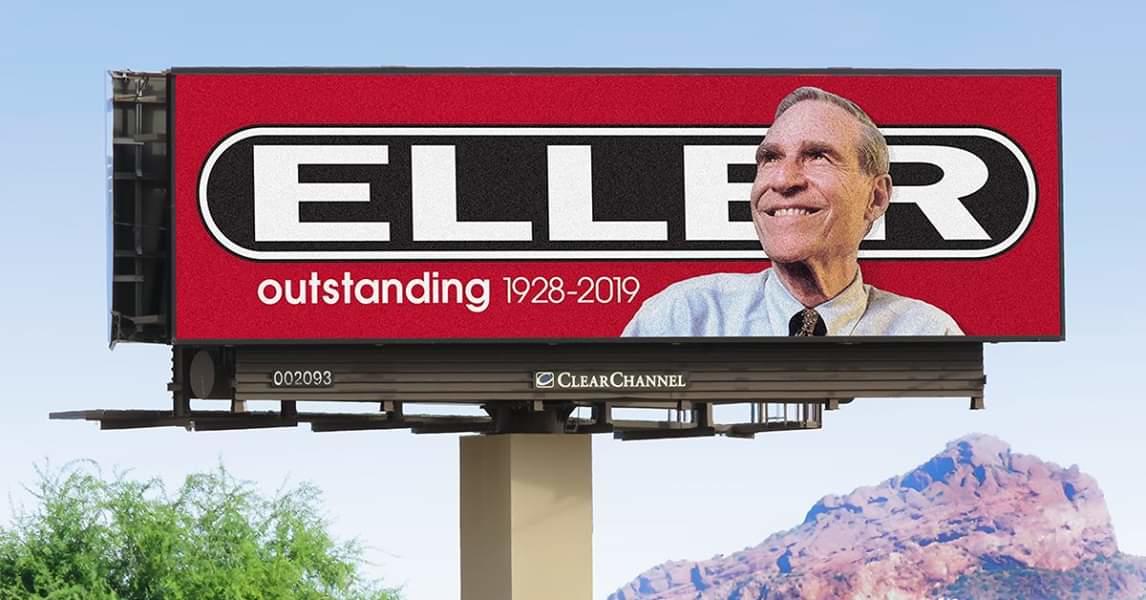 If it can be said there is only one person who has had the greatest influence on the Outdoor Advertising Industry in multiple generations and Out of Home companies, it would be Karl Eller.

Karl Eller passed away at his home in Phoenix, Sunday, March 9th. He was 90.

Much has been written during his life and now in his death by scores of OOH professionals.  Karl Eller affected a multitude of companies and individuals directly and indirectly through his leadership.  He is the only person to lead two of the Big 3 OOH companies, at different times during his career, who are today known as Clear Channel Outdoor and OUTFRONT Media. His guidance directly on the aforementioned and indirectly on many more OOH companies, left an indelible impact which endures.

Here are comments from OOH professionals who knew Karl Eller and of his influence on the OOH Industry.

“Having known Karl Eller for years, it saddens me to hear of his passing. Karl is on the Mount Rushmore of individuals who have spent a lifetime shaping the OOH industry as we know it today. Always thinking big (Coke) and never underestimating the value of OOH in an advertisers media strategy, Karl Eller was a leading voice for OOH and we will miss that energy. Also, Karl loved great billboard creative, knowing the power of the medium emanates from the impact of the messaging.  He was a friend to anyone that ever sold a billboard.”

“Karl was a true leader in the Outdoor Industry. He brought the industry into the 21 century through his leadership and forming the largest outdoor company in North American. He will surely be missed.”

“As Mark Zuckerberg is to social media, and Jeff Bezo’s is to shopping on-line, the OOH industry had its
Karl Eller.  Everyday Karl put his heart and soul into Outdoor Advertising … not because he wanted to make a buck (that too) but because he knew the power of the medium.  He knew his clients would sell more product and services if they invested their media dollars into Outdoor Advertising.  We will miss you Karl, thanks for the memories, God Bless!”

Karl Eller —”A mentor and a friend.”

“I first met Karl Eller in 1988 when I began at The Coca-Cola Company. I was amazed that Karl could equally meet with Global CEO’s and assistant media buyers. He valued every voice and gave each person a chance to offer their perspective.

Karl was an icon in many ways and many industries. From Circle K, to Combined Communications to Columbia Pictures, to Eller Outdoor to being inducted into the Advertising Hall of Fame. In 1999, the Eller College of Management was named in honor of Karl, an alumnus of the University of Arizona.

Karl had successes and failures and learned from both. He was principled and valued integrity in every business decision.

Over the years, I learned so much from Karl. I always valued his opinion, experience, advice and positive attitude. He never believed in short cuts. He always wanted to do things the right way. It was unusual to not have him bend me ear on a Saturday morning call to my cell phone.

I will miss him but will always be grateful for the incredible impact he had on the people he touched and mentored. I held him close as a favorite mentor and as a good friend.

Karl was a giant who inspired so many people in an industry he loved so much.”

“Karl was a true man of integrity.  In fact, he wrote a book on integrity.  Karl was a giant in our industry when he sold his company to Gannett.  He went on to head Columbia Pictures and Circle K Convenience stores.  It rose to be the third largest chain in the industry.  Unfortunately, they came on hard times and had to declare bankruptcy.  Karl’s attorney and accounts advised him to declare personal bankruptcy.  But he refused.  His personal integrity was at stake.  He personally went to every one of his creditors to work it out with them.  He came through it and wound up buying the Phoenix OOH market back from Gannett.   Karl may be remembered as a giant in our industry.  But I just love his passion for living a life of integrity.  That is what I will remember him for.”

“We talk about people who “get it”. Well Karl Eller got it, he got all of it. He believed it all started with taking an idea forward to clients. His passion and dedication were infectious,  and you saw it in everyone around him. It was my honor and privilege to serve on his team. Our business has lost its greatest leader.”

“Karl was a great American Hero.  In a way he was the great Gatsby.  He had drive, ambition, intelligence and unique charisma by the truckload.  And he used them all.  He was a salesman’s salesman thru and thru.  But perhaps most importantly, those that liked Karl didn’t like him: They loved and worshiped him.  In my humble opinion, he elevated the business to another level.  Just being around him made you feel like you were in the most important industry in the United States.”

“Karl Eller’s name and the work he accomplished in the OOH business will last forever.  I had several opportunities to work with Karl throughout my career.  He had an all around mastery of the OOH business from the understanding of space and to the creative which filled the space. Rest in peace Karl.”

DPAA Expands Board with Atmosphere’s Sabatinelli and Simon’s Harding