Standing for "The Star-Spangled Banner"

You know the Kaepernick controversy?  Nike is jumping in feet first, as it always does, feet first that is, in supporting a guy who has not taken a NFL snap in over 2 years.

Lot’s of controversy already and the billboards have not even hit the streets yet. Where do you come down on the subject? Would you reject the Kaepernick creative?

Nike’s new ad campaign which just appeared in time for football.  Nike has brought out former 49er’s QB Colin Kaepernick, in an ad which will see Outdoor Advertising soon.  By Wieden + Kennedy, the ad copy will say,  “Believe in something. Even if it means sacrificing everything”. This Nike message refers to the former NFL quarterback’s decision to kneel during the national anthem as a way to protest racial injustice—a move that may have cost him his career.

It could also hurt Nike with the message depending on how the public reacts to this controversial subject matter.

The AP reports, the brand will feature Kaepernick on a number of ad platforms—#billboards, TV, online ads—and create an apparel line for him, and contribute to his Know Your Rights charity. The deal puts Kaepernick in “the top bracket” of NFL players signed with Nike, the AP said. Big commitment to a player who hasn’t taken an NFL snap since 2016. 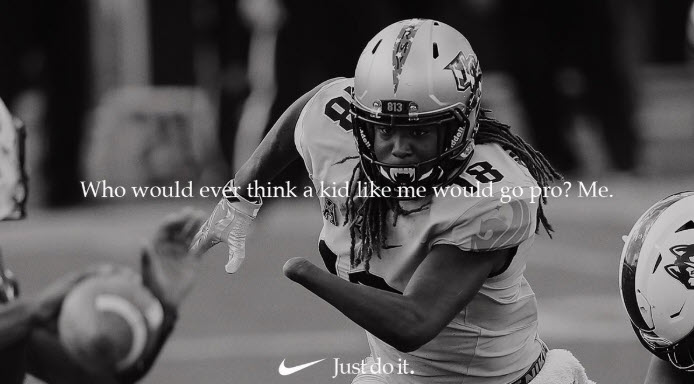 “We believe Colin is one of the most inspirational athletes of this generation, who has leveraged the power of sport to help move the world forward,” Gino Fisanotti, Nike’s vice president of brand for North America, told ESPN.

Is Nike building brand or destroying revenues? Many on Madison Avenue are betting on Nike /Kaepernick partnership.  4th quarter sales numbers should be the tale of the tape.

Now Forget It and Just Do It Again. Nike OOH