Now Forget It and Just Do It Again. Nike OOH 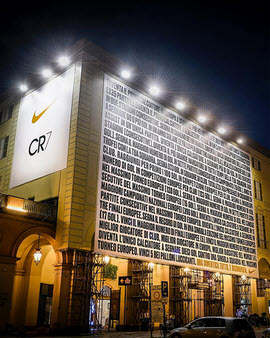 Nike Out of Home Goal Missed

Nike billboards are normally recognized and praised for their simplicity and award-winning creative. Then they did this crazy work.

The great Cristiano Ronaldo left his former team of 9 years, Real Madrid, for Turin, Italy based, Juventus this summer. Nike created the billboard through agency Wieden+Kennedy/Amsterdam.  The soccer star has an extensive list of accomplishments: winning 15 trophies, scoring 573 club goals, scoring in 11 straight league games (the only player to ever do so), being named FIFA’s player of the year five times. So why not list them on the billboard? Well for starters, No one will read it.  There is no second reason.

The creative idea goes on to suggest you’re only as good as your last win.

The mind bending over the top copy ends with a challenge to Ronaldo: “Now forget it all, and do it again.”

Wieden+Kennedy Amsterdam created the billboard, which was set up in Turin just before Ronaldo’s first home game last weekend.

Count the number of words and return to me to match my number and you receive an OOH resort sticker, and 2018 OBIE Awards book.  We’ll announce the winner on September 11th.