Google’s DOOH Campaign “Make the Most of Summer” 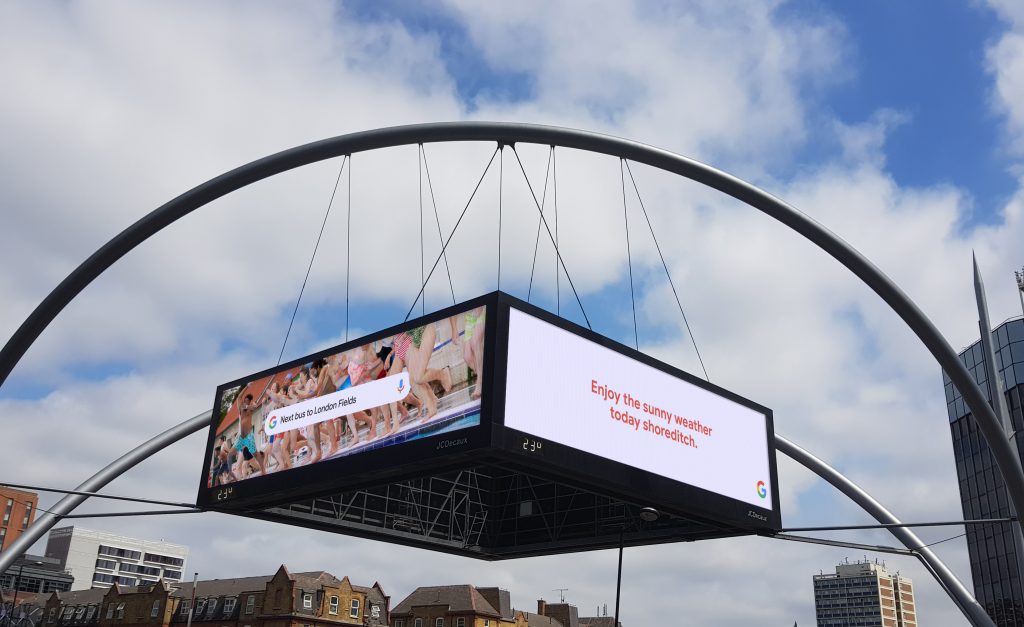 The campaign showcases Google’s Search functionality with popular city-wide summer search terms, such as ‘Best ice cream in Glasgow,’ or ‘Parks near me,’ to demonstrate how Google is there to help you enjoy the summer. Dynamic creative is delivered via ad tech platform, OpenLoop, and is powered by Google Search trend data.

Here is the complete story below.

Google Launches Data-Driven DOOH Campaign “Make the Most of Summer”

London, UK  Google extends its “Make the Most of Summer” campaign with a responsive, data driven, nationwide, digital OOH push that demonstrates the little ways in which Google is there to help you enjoy the summer.

The campaign showcases Google’s Search functionality with popular city-wide summer search terms, such as ‘Best ice cream in Glasgow,’ or ‘Parks near me,’ for example.

Full motion sites across London, Manchester, and Birmingham, also list the results for search terms, including star ratings, opening times, and map directions with creative also reacting to time of day and local weather conditions, to provide the most relevant creative in the moment.

At Old Street EC1, London, creative features additional location-specific, weather, time, day, and temperature triggers, and taps into cultural events such as The Ashes, to contextualize creative during the campaign.

Google’s Media Lab, Consumer Marketing and Creative Lab teams worked alongside agency partners to conceive and deliver the project. Created by 72andSunny Amsterdam, and produced by Grand Visual, the campaign was planned and booked by OMD and Talon and runs across transit, retail and city-center locations until the 25th of August, with an extended run at Old Street roundabout.

Graham Bednash, Director of Consumer Marketing at Google UK, said: “There’s something unique about the British interest in the weather and the way we react to summer. We love the way this campaign really captures that and shows how Google Search and Maps can help people make the most of it.”

The opinions and points of view expressed in this post are exclusively those of the author and/or subject(s) and do not necessarily represent the views of OOH Today management or associated writers.

Vector Media —Once Upon A Time in Hollywood

Quentin Tarantino’s Once Upon a Time in Hollywood