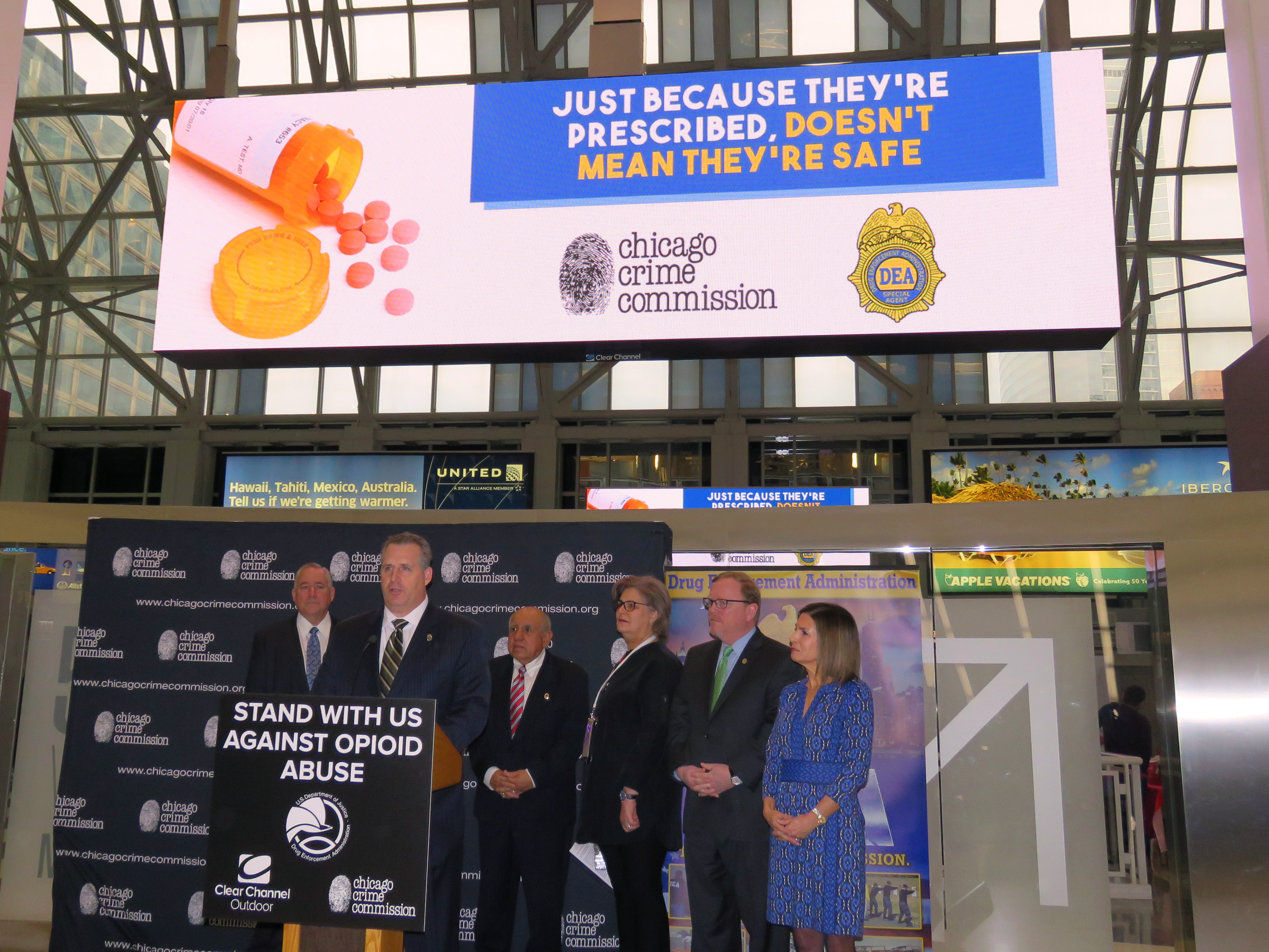 A partnership was announced today among the U.S. Drug Enforcement Administration (DEA), the Chicago Crime Commission, and Clear Channel Outdoor to highlight a public awareness campaign that addresses the prescription opioid, heroin and fentanyl epidemic that is plaguing the city of Chicago, our state, and our nation. Provocative and informational drug prevention and treatment messaging has already begun to appear on numerous Clear Channel Outdoor digital billboards in Chicagoland. This 12-month digital campaign will run on up to 15 digital billboards and on 20 Metra in-station digital displays to promote the prevalence and dangers of opioid abuse.

This collaborate effort between DEA, the Chicago Crime Commission, and Clear Channel Outdoor, is estimated to deliver over 150 million impressions over its 12-month span. The goal is to reach those affected throughout all stages of the fight. These messages target all members of the community, from those in need of prevention programs to those who need help for themselves or a loved one.

In 2017, opioid-related overdose deaths in Illinois exceeded 2,200, with around half of those deaths occurring in the Chicagoland area. Fentanyl is the driving force behind the increase in overdose deaths. According to the Cook County Medical Examiner, in 2017 there were 669 fentanyl-related deaths in Cook County.

In a news conference held earlier today, DEA Chicago’s Associate Special Agent in Charge, Robert J. Bell, and representatives from the Chicago Crime Commission, were joined by Amy Voss, a local advocate in the fight against opioids; Douglas O’Brien, Health and Human Services-Regional Director (Region V); and Kim Bradley-Regional President Clear Channel Outdoor (Midwest) to speak with an audience of reporters and supporters to underscore the need for raising awareness of the opioid crisis across the state of Illinois and the country.

“What we want is to motivate parents are caregivers to talk with their children about the dangers of these deadly substances to prevent experimentation and addiction before it starts. This campaign offers hope for those who are in the grips of dependence – hope for their families – hope that there is a path to treatment and stability,” said DEA’s Robert J. Bell.

“DEA is very good at identifying and arresting drug traffickers, but law enforcement efforts alone can’t solve the problem. This epidemic needs to be attacked from every angle – catch the bad guys, help those who need it and make sure our children, partners, friends, and neighbors never start misusing drugs,” said J.R. Davis President and Chairman of the Chicago Crime Commission.

“Opioid abuse is a national epidemic,” said Kim Bradley, Regional President, Clear Channel Outdoor – Midwest. “We believe the power of out of home media can direct victims and their families to relief or assistance from addiction. Our collaboration with the DEA and the Chicago Crime Commission will drive awareness in our communities of what is now the deadliest drug crisis in American history. We want citizens of Chicago to know that it’s never too late to get help.”

One of the best ways to put the dealers out of business is to take away their customers. If we are open and honest about how deadly this crisis is, we are more likely to reach that child, friend, or spouse before they take that first hit, that first pill, that first step to addiction. Today’s announcement, and this billboard campaign, will help jump-start that conversation.