Cashing In On The Billboard Kingpin: Lamar Advertising

Is it time to invest in Lamar Advertising stock? According to financial writer and investor, Kenny Robinson, it is.  Kenny Robinson, who is a full-time investor, writes about dividend stocks and long-term strategies.  He is long in Lamar.   Robinson says, ” Lamar Advertising Company is the clear leader in the OOH space and has proven its ability to deliver results to its diverse pool of clients.”  Robinson’s summary of investing in Lamar is below.  He makes a good case.  What do you think?  Do you own shares in Lamar?

Lamar at current pricing, is undervalued by about 30%. In simple terms: It’s on sale!

Lamar is one of the largest outdoor advertising companies in the world, with more than 340,000 displays across the United States, Canada and Puerto Rico.

Structured as a REIT, Lamar currently pays an annualized dividend of $3.64/share.

The recent lucrative activity of Lamar and why you might want to give this income producer a second look.

Lamar is able to profit from many unique niches including national and regional political campaigns.

Lamar at current pricing, is undervalued by about 30%.
It’s on sale! 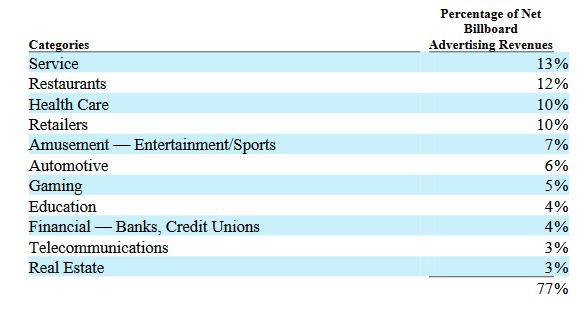