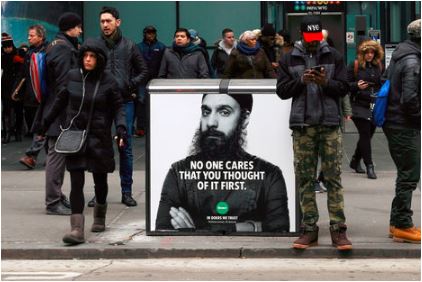 There is a great deal of activity surrounding Vector these days with acquisitions, in hiring, on speculation of further acquisitions.  It’s all good. Vector recently acquired Direct Media and hired senior staffing with OOH experience.

It looks like a solid hire for Vector and one which will help the OOH Industry.  A rising tide lifts all boats.

Jim is a highly strategic and thoughtful leader with broad perspective that enables him to understand client challenges and the impact that a fully integrated marketing campaign can have for brands,” said Marc Borzykowski, CEO of Vector Media. “The Vector platform is truly unique in its ability to span multiple media segments. We are committed to building a team of passionate, intelligent and creative thinkers with diverse perspective and Jim’s experience working on client strategy with industry leaders like NBC and the NBA, has shown him to be someone who can creatively solve client challenges.  We expect Jim to be a great asset to our team and to our clients.”

In this new role, MacCurtain will lead Vector’s client strategy and product development efforts. He will work closely with colleagues and the leadership team to uncover behavior-driven insights to create new opportunities and drive growth and value for Vector’s clients.

MacCurtain has over 14 years of sales and partnership marketing experience with a focus on media and sponsorship sales and deep knowledge across broadcast, digital, mobile, event and OOH channels.  He was most recently Vice President of Olympics & Sports Sales and Marketing at NBC Universal where he was responsible for strategic sales and marketing leadership for NBC premiere Sports properties and events, including the Olympics, NFL, Super Bowl, British Open, French Open, Kentucky Derby, Premiere League and NHL. Prior to NBC Universal, MacCurtain was at the National Basketball Association (NBA) where he was responsible for creating robust marketing partnerships with Fortune 500 companies across the NBA, WNBA, USA Basketball and NBA D-League properties. MacCurtain also held strategic positions at United States Tennis Association (USTA) and Velocity Sports & Entertainment.

“I’m thrilled to be joining such a dynamic and progressive company,” said MacCurtain. “Vector’s core offerings allow advertisers to impress, impact, immerse and engage consumers in the “real world”, which is a really strong complement for advertisers whose efforts are principally focused on digital and broadcast. Today’s consumers are elusive, but more open than ever to building positive relationships with brands and Vector is well-positioned to help forge those relationships.”

MacCurtain earned his undergraduate degree from University of Richmond and a master’s in sports management from UMASS-Amherst.

The preceding press release was provided by a company unaffiliated with OOH Today.

Cashing In On The Billboard Kingpin: Lamar Advertising

Jason Kiefer —What’s on Your Phone?