Sell your OOH Space and Get Paid On Time 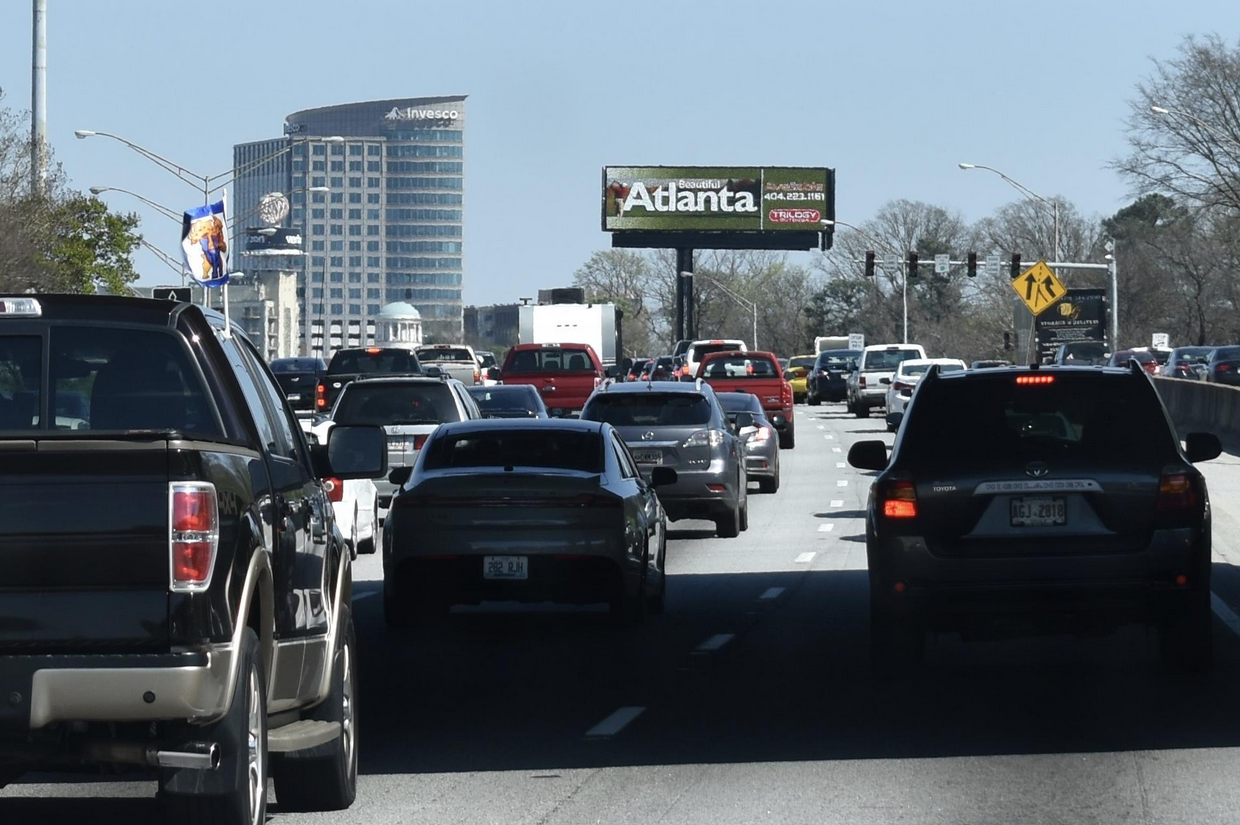 by Brent Baer, publisher for OOHToday.com

Ever receive a billboard photo which made evaluation and subsequent selection, more difficult than it was prior to seeing the photo? Let’s look at what makes an outstanding picture for a photo or ride sheet, including the mistakes to avoid.

If you have worked on the out-of-home (OOH) buyer’s side for any length of time, you have seen a wide variety of pics within photo sheets that represent a billboard company’s ‘best efforts’ via a photograph seeking consideration for your purchase of space. The photo sheet is used as an inducement to buy a particular location. Every #OOH owner seeks to present the best possible image of their OOH inventory. Sometimes the photo in the sheet submitted, makes you wonder about the quality of the location and even about the company who submitted it. An OOH owner’s opportunity to demonstrate the proximity of the sign and quality of the location is a daily occurrence. The Photo Sheet , Ride Sheet or ‘photolith’ — as we called them in the old days — was the OOH owner’s proof of a quality location (but not proof of performance).

You did the difficult part, you made the trip to the location.

I have been fortunate to literally view thousands of different OOH owners’ photo sheets working from both the agency buying and the owners’ sides of the fence. The variations are astonishing. Like a family portrait, the photo should be the best shot the owner can muster. But sometimes someone has their eyes closed and ruins the shot. You did the difficult part, you made the trip to the location. Take your time, shoot and reshoot multiples.

The ‘Rules’ spelled out below are for ‘approach shots’. ‘Beauty shots’ are a different story (and a later post). These rules are for photographing and submitting OOH locations for client buy approval and proof of performance. Follow them and it will help you sell your space and get paid on time. Any references similar to how you or your company may operate and provide photos as an OOH owner, is purely coincidental. Unless you are one of the Big 3 mentioned in rule number 12 below, in which case is not a coincidence but a flattering replication of our 13 Rules. I believe most poor photo sheets which are submitted, are done so out of ignorance, without the intention to mislead. (Well, except for the traffic fabrication incident mentioned in Rule #2.)

What makes a good billboard photo?

Follow these 13 Rules to help you sell space and get paid on time.

1. The billboard is front and centered in the frame.

2. Show traffic in the photo. Lots of it. Whether it’s cars or people for (street furniture or experiential), show real traffic. Don’t send your OOH sales team out to the interstate and have them slow down to a near dead stop while your photographer stands ready to capture a rush hour traffic tie up which doesn’t normally occur. (Yes, this happened in the 80’s in a southern city.)

3. Shoot at street level — no rooftop perspective, bridge/overpass or drone photos. Photos taken from a position other than where the intended impression is counted, is misleading; a red flag to buyers. Position the camera at the same street level as the eyes of the audience. If I see another photo where the camera is at roof top level peering down on the sign, I may consider jumping.

4. Position the camera on the same side of the road as the Outdoor would typically be viewed. I am not talking about a cross reader. While I was working at Posterscope and Posterscope II, whenever we received a photo where the camera was positioned across the street looking backwards or sideways to the sign of interest, we knew we had a problem and kicked it out. Sometimes we would ask for another photo shot. That second chance does not always come about for the vendor. It’s a lost sales opportunity and question of trust. 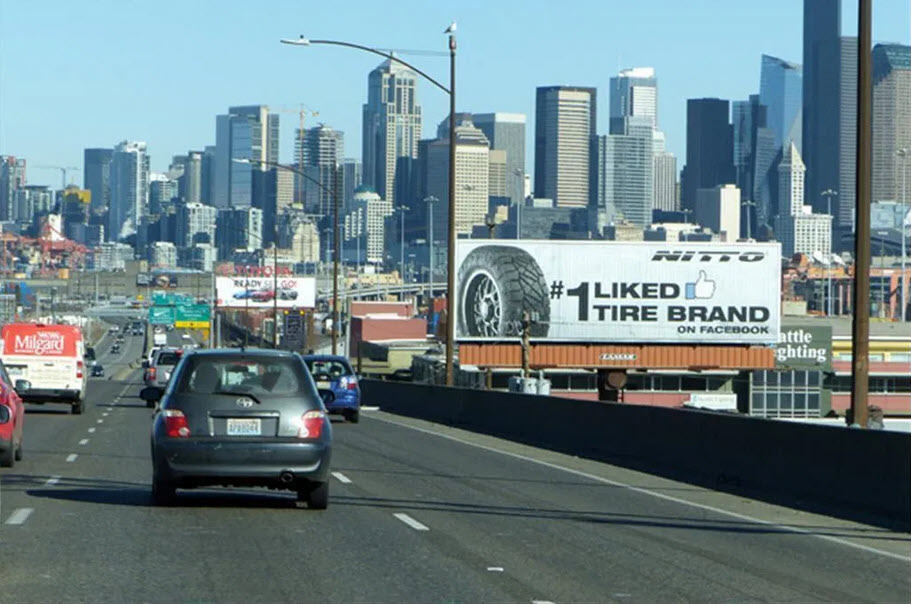 5. Provide a photo with the camera positioned from the center or the right side of the road. Stopping in the emergency area on the left side, or positioning the shot from the far left lane shooting across three or four lanes to the right, leads to questions of obstructions, trees, or buildings. Either way it spells: BLOCKED VIEW!

6. Keep it real. Keep the trees, light poles, wires, and obstructions. Stop using Photoshop or other software refinements to obfuscate, which mislead.

7. Add a white, black or yellow electronic “block out” with great caution. Keep the size of the face accurate. Don’t embellish with a larger than reality “yellow block” over the top of the billboard face.

8. It’s okay to add an arrow or another means to identify your billboard face when others exist in the frame. Billboard farms happen. Make it easy for the viewers to identity which face is yours.

9. No China photos! Keep a distance so the viewer can identify the area. Providing a photo so close that there are no unique identifying characteristics in the frame could leave the viewer to wonder if the billboard is in China or Chicago. 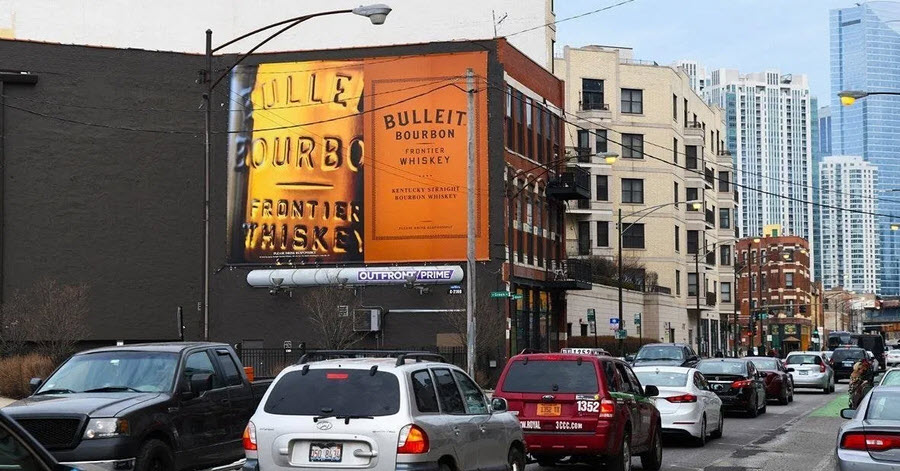 10. Keep the photos updated. The 1999 Oldsmobile as part of the traffic in the picture; it is a dead giveaway.(Olds went out of business in 2004.) Trees grow significantly in 10 years. Building are built which may block and roads change. Time to update the entire plant’s photo inventory.

11. Use technology to verify. In the words of Ronald Reagan: “Trust, but verify.” Some agencies require a Google photo or a recently taken photo of the submitted billboard for purchase consideration. Google photos are a good source to verify but only verify.

12. Hire a professional photographer and provide instructions or this article. We were told by several sources, a certain CMO at one of the Big 3, we will not name the company, circulated this post in a company wide email directing the entire organization to follow our 13 Rules for Photographing Billboards.

13. Make sure the sun is in front of the billboard face, not behind the face in the background. Have the sun at your back when you photograph the billboard. Pay attention to the angle of the sun falling on your subject in relation to the direction you are shooting. If it’s behind the billboard, it will usually create a shadow darkening the image or creative. Wait for the right time of day for the sun to be in position. Sometimes, it is simply a case of moving yourself into the appropriate position.

13A. Use an ultraviolet (UV) filter or lens on your camera.  The UV lens will prevent the copy from washing out. We always do and the blues are bluer, greens lusher and well, all the colors richer.

What else makes a good picture for a photo sheet or Proof of Performance photo?
Share your comments.

Help us Help You.
click here to ⇒Subscribe to OOH Today for more on the OOH Industry