When Eminem and OOH Suddenly Seizes the Moment

Reviving a Subtly Clever Deception of an Outdoor Advertiser

This is so old, but also so Dope, it has to be shared just in case you missed it.

A very clever marketing campaign with a fair amount of misdirection (I hate that when that happens) in this Out of Home billboard for Marshall Mathers.  You know the Rapper, Marshall Mathers or Eminem. The billboard wall in the photo above, is introducing, rather sublimely, Eminem’s  new, yet to be released (at that time Mid-September 2017) album launch.  Go ahead zoom in if you can. Read the copy. There is not much in what is commonly Outdoor Advertising’s overt self hype and copy indicating the message is anything but another men’s Erectile Dysfunction medication.  Right?  Fake ED message?

One man’s ED message is another man’s Revival

MilkMoney, Inc. and its CEO/Founder, Sam Keywanfar, were responsible for planning and buying the wall space for Marshal Mathers with the fake Pharmacy Advertising.

Here is the fun side with more details to the story.  The OOH design is full of uniquely clever, subtle, and teasing copy with Eminem specific references, even the most dedicated fan might had struggled to figure it out.  The backwards “E” in the brand name and the ad’s closing copy, all hints to and are signatures of the Artist.

The suspect sounding Latin medical name for the faux drug, “Canticum Remedium,” roughly translates to “The Song Cure.”). ‘Cure’ to refresh your memory of Eminem’s discography, is from his COLLISION COURSE 3 album.

Even the rapper’s manager, Paul Rosenberg, had some fun with the ‘put on’ creating his own sleight of hand trick on his Instagram account in the photo below.  Note the Revival Wallscape billboard outside the window in the background above the Yelawolf CD he is holding.

Clearly, the billboard reads like an Erectile Dysfunction medication message. Standard images and colors, like a typical Pharmacy message.  Maybe too authentic and subtle.  It fooled a lot of people. Did Lamar know up front?

Read the complete story, if you don’t know it already, its pretty dope. And when you finish reading, you will be ‘dope’ too.  Click → Adweek Revival 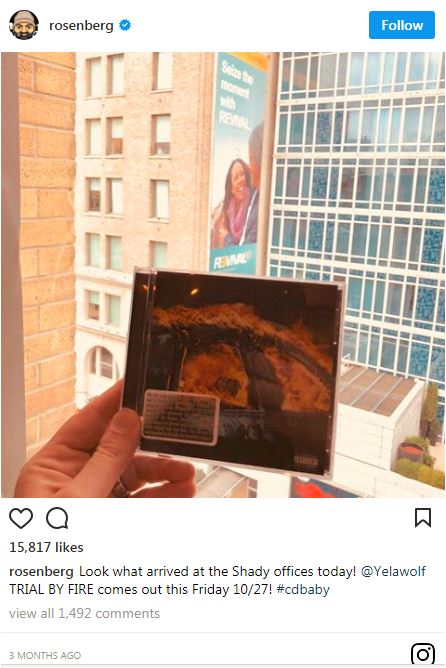