What to do with OOH Bought pre-COVID? 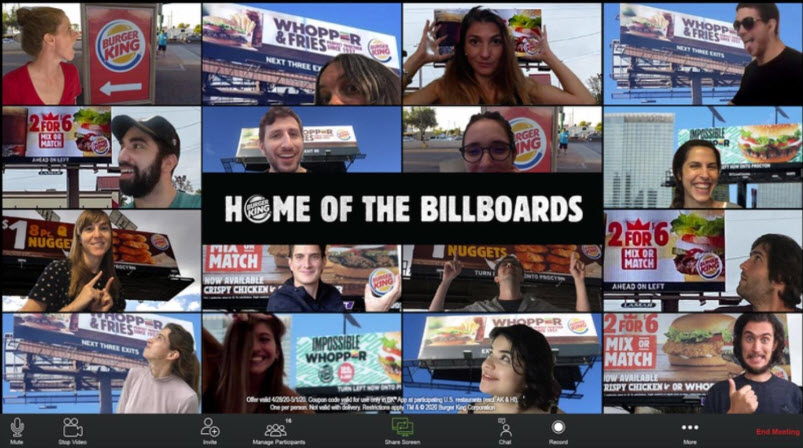 What to do with Billboards Bought pre-COVID?

Just when you think your creative sales brain is about to explode because it is working overtime to come up with that great idea to sell your OOH space because the gov’t is telling everyone not to go out of home to stay at home, Burger King figures it out.  BK leveraged its OOH to social media.

Advertising has to become more creative than ever especially outdoor advertising.

As BK tells it, “everyone’s staying inside, and our billboards are going to waste with no one out there to see them. Sooo we made backgrounds. use these on a video call, post a screenshot with @BurgerKing and #HomeOfTheBillboards & we’ll DM you a BOGO Whopper coupon for being our new #ad”

From the agency who came up with the idea, DAVID-Buenos Aires:  “On the one hand, the streets covered with Burger King Corporation OOH that nobody sees. On the other, millions of people changing their Zoom backgrounds for outdoor images. It was a matter of bringing these two things together to create a win win deal. Home of the Billboards¨.  Amazing team effort from
David-Buenos Aires, all the David Family and Burger King Corporation USA, Brazil and Argentina.”

So why didn’t we think of that?