Stunning Out of Home Campaign for Black British Network 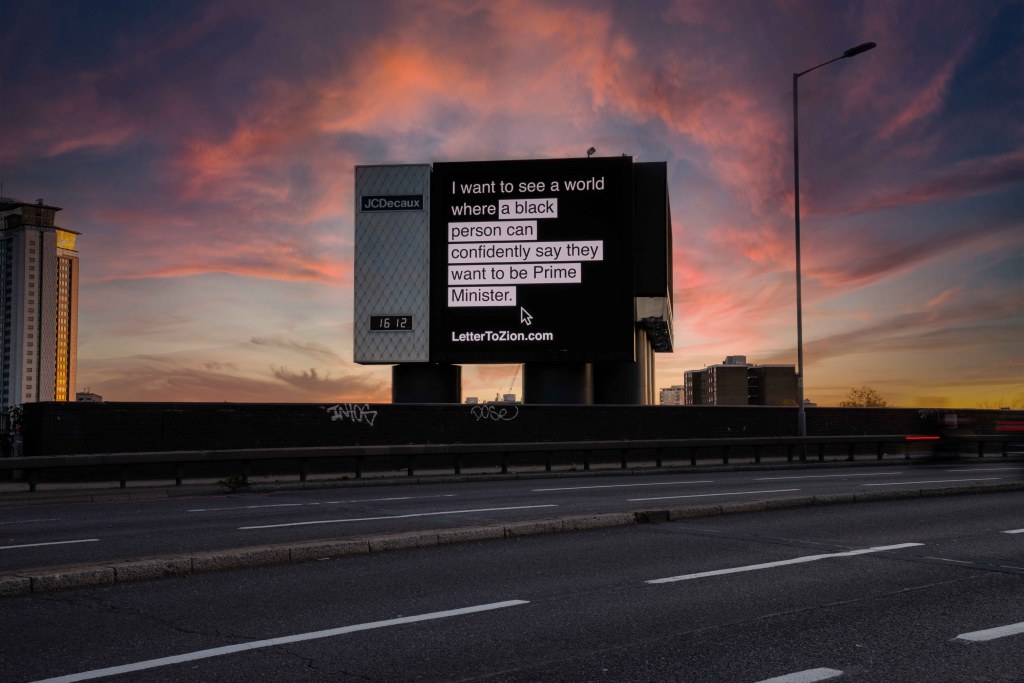 Cephas Williams, founder of the Black British Network, has launched an inspirational campaign, which features on Out of Home (OOH) digital screens throughout November and December, publicizing his moving Letter to his son Zion written in the wake of the killing of George Floyd. The move is currently supported by 12 UK industry leaders including Phil Thomas, Keith Weed, Stephen Woodford, Jude Kelly, Barry Cupples and Paul Polman.

The campaign, which is to support Williams’ crowdfunder initiative to support the Black British Network, aims to promote change and a dialogue not restricted to October’s Black History Month. The OOH campaign uses creative including the introductory line “I want to see a world where…” and includes subsequent copy such as “…people respect each other’s differences”, “…black history is not just celebrated in a single month”, and “…where black people are treated fairly”.  All taken from Williams’ letter as seen on http://www.LetterToZion.com.

The OOH industry is supporting the initiative in a campaign worth over £1 million, with the project led, planned and coordinated by Talon. The distinctive black and white creative copy-led messaging, which includes the iconic end-frame image of Cephas holding his son, Zion, has been developed and created by Grand Visual. It will run in November and December, and into 2021, across sites donated by Blow Up Media, Clear Channel Outdoor, JCDecaux, Ocean Outdoor, Open Media, Maxx Media and Smart Outdoor.

The Letter to Zion, written to his son as a vehicle to bring about continuous dialog and tangible change regarding the black community and wider landscape, followed the birth of his son around the time of George Floyd’s killing in the US. Cephas spent months writing this timely letter and released the letter on October 9th, his birthday.

As Cephas Williams explains, “Unfortunately, it took the killing of George Floyd to bring about this awakening and now with companies and leaders going back into the cooler, my concern is that we have not yet successfully created something that exists independent of corporate frameworks that can be used as a tool to help bring about the change we need to see. This stance, supported by a variety of industry leaders and now the Out of Home industry in bringing my message to the wider community and beyond a single reference point, such a s Black History Month, will reinforce the message of the Black British Network, that ‘Together We Are Stronger’. The hope is to create a ‘unified knock’ that goes beyond lip service and tokenistic gestures and starts to look at primary behavioral and systemic change, to support a mission that prioritizes a more reflective approach and response to the black conversation than a reactive and opportunistic one.”

Barry Cupples, Group CEO of Talon, who’s team planned and coordinated the OOH activity, adds: “This is an unbelievably important cause that we’re very proud to be involved with alongside some amazing Out of Home media owner partners. Bringing the message to a wider audience, highlighting its importance and showcasing some extremely powerful ad content, will really stand out in this period ahead and drive the desired effect of delivering impact, action and change.”

Commitments to the Letter to Zion and the further ambitions of the BBN so far includes the support of the OOH industry through media space, plus companies like Alfa Systems, O2, Ernst & Young and Clear Channel committing to the BBN Round Table Conversations and other key deliverables proposed by the Black British Network to bring about long lasting change in this area. Clear Channel, who initially worked with Williams to amplify the ground breaking 56 Black Men ‘I am not my stereotype’ campaign in 2019 and the ‘Let’s Not Forget’ campaign in 2020, connected Talon to Cephas as part of an ongoing ambition to further unite the OOH industry in support of Williams’ message and vision for change. This is the start of an ongoing and powerful relationship that will be committed to supporting the BBN in driving the change we need to see in this country and the wider world.

About Cephas Williams
Cephas Williams is the Founder of the Black British Network and a public speaker.  In 2018 Cephas Williams launched the ‘56 Black Men’ campaign to challenge the negative stereotypes of black men in the media and spotlight positive achievements of black men in his community. He has been successful in galvanizing huge support for his work from the likes of Accenture, EY and  Clear Channel. Cephas’s new work however is to broadcast a new message and create a new conversation through his new venture The Black British Network.

About Talon
Talon Outdoor is an independent Out of Home media specialist and a significant player in the Out of Home agency sector with a focus on delivering smarter, creative, technology-led and integrated OOH communications. Combining independence with a collaborative approach, Talon promotes open working between agencies, clients and media partners. Talon has offices in London, Manchester, Frankfurt, New York and San Diego, plus several other US cities.