This is Los Angeles’ Newest Video Display and it’s a MONSTER! 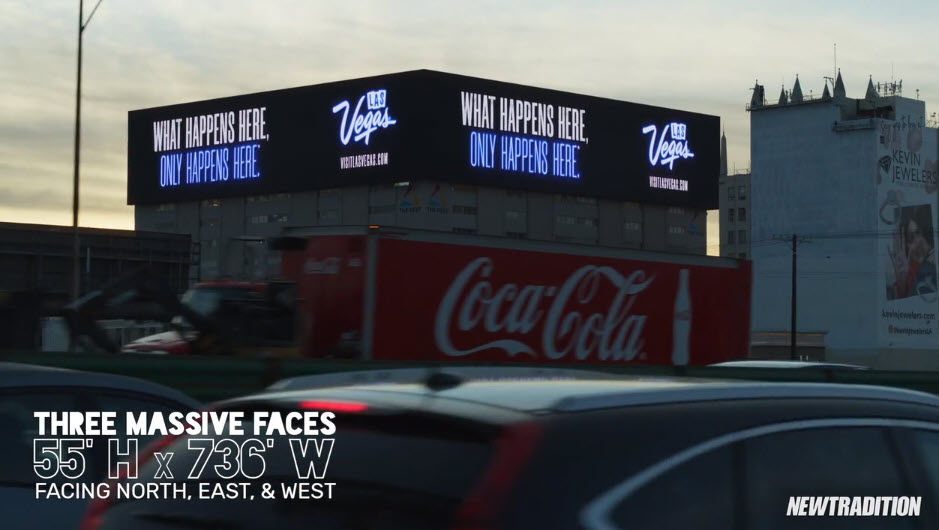 We are not a fan of posting a new OOH build when it hits the streets. In many ways, we are fortunate to receive on average a dozen weekly submissions to share new builds with you, but in the long run, it becomes too much and too uneventful to share everything. Here is an exception, because size does matter, especially in Out of Home, over 40,000 square foot exception.

New Tradition tells us they are an out-of-home media front-runner when it comes to anything but traditional signage and is the media vendor selling this advertising space featured on the new display mounted at the top of The Reef’s facade in Downtown LA. Footage of the new display along with additional information can be seen in the following video.

According to the press release; The Reef is a brand new digital development located in the heart of Downtown LA. This single massive 736-foot screen is a one-of-a-kind spectacular towering North, East, and West over the I-10 (Santa Monica Freeway) and 110 (Harbor Freeway), which are two of America’s busiest highways. At over 40,000 square feet, it is 3 faces 50 feet high by 736 feet wide, The Reef is now the largest digital out-of-home billboard in the world and the highest Geopath-rated display in the country, delivering over 173 million weekly impressions to the Los Angeles DMA. Given its colossal size, The Reef is visible to all of DTLA, including the extremely popular LA Convention Center, STAPLES Center, and LA Live, which combined welcome over 26 million annual visitors from all around the world.

Going to School with Blip —An Exam Under the Hood

For Salespeople in OOH —Cohoot Keeps You in Touch