Going to School with Blip —An Exam Under the Hood 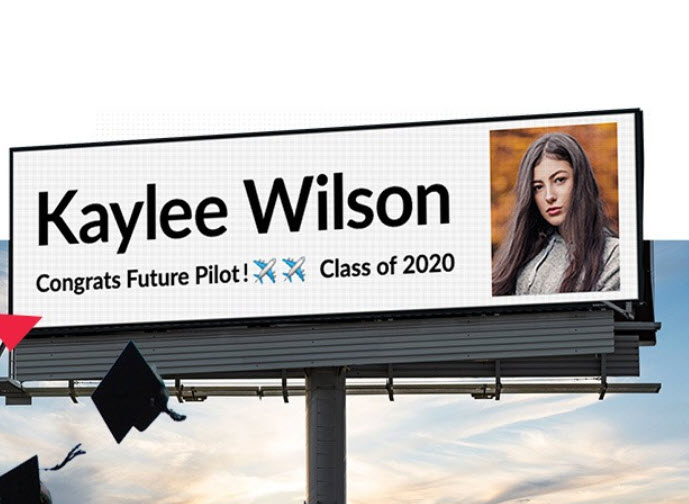 Blip’s ads for grads — under the hood

Blip’s VP of Marketing, Daniel Fleischer hit the ground running in his relatively new role starting 8 months ago.  We managed to slow him down just long enough to get more details about how their “ads for grads” campaign is moving along. Saying congrats on a billboard is nothing new; OOH Today examines under the hood of the Blip self service platform for digital billboards and the Ad’s for Grads.

BB: Remind us: Blip focuses on small business access to billboards, what’s the story behind marketing to parents of graduating seniors?
DF: You’re right – Blip isn’t typically a consumer-facing marketing company. However, we knew that bringing the same flexibility we afford small businesses every day to advertise on billboards with any budget could be extended to a “consumer” segment that needs to honor their loved ones right now. Readers of OOH Today understand the value of OOH and how accessible it can be – but the general public doesn’t know that. Blip saw this as an opportunity to help the general public leverage big billboards to get big smiles.

We simply created an advertiser-facing campaign, same as we would for any business vertical, and provided step-by-step self-serve instructions to make it foolproof to get a congrats message off the ground (pun intended). We recommended an optimal spend, provided artwork and message examples, and very importantly, gave them access to our free Artwork Generator tool that our business clients use to quickly generate their own custom ads (that alone worked wonders.)

What’s really cool is that a bunch of entrepreneur parents who went through the process came away from the experience realizing that their businesses could, and should, use Blip for their business based on how surprisingly easy the whole thing turned out to be, for them.

BB: How many markets are you able to provide?  What markets are you unable to provide?
DF: The offering is available wherever Blip has inventory, which comprises approximately 1500 digital billboards across almost every state. Even in regions where we only have a few billboards for now, the offering is valuable as there are parents and grads in every community across the nation.

BB: How close can you place into proximity to the educational institution?
We try to get as close as possible, but it depends on the location of the boards and the school. It is also ultimately the parent’s decision to determine which billboard is most accessible to them and their families. They love driving to a safe location from which they can see their message personally and record a video and take photos.

BB: Any actual photos you can offer?
DF: We have loads of examples and more than a few heartwarming testimonials from parents who were so appreciative of the difference this initiative made in their loved one’s life. See below for one example that brought a tear to pretty much everyone’s eyes here at Blip, when we found out that Blip’s self-serve offering was able to bring major smiles to a graduate with high-functioning autism:
https://www.facebook.com/photo/?fbid=2063408613802917

Then there’s this story of a couple in Montgomery AL who self-served congratulatory ads for their graduating son on billboards precisely on the schoolbus route at times when everyone on those buses would see the ads on the way to and from school:
https://www.blipbillboards.com/success-stories/moore-graduation/

We have so many awesome success stories for which I wish I had links to send you – such as a parent in Michigan who is taking this initiative with Blip to the next level and getting the entire graduating class of 125 seniors on billboards around that community.

There have been countless examples shared with us, which means there are probably many more that we don’t know about.  We’ve got drone footage too if you want to see some fun stuff.

BB: How many segments are guaranteed for the $20 per day?
DF: We suggest a budget of $20/day to get as much exposure as possible. While it is easy to self-serve one’s way through the process quickly, we have account executives available to help with creating the campaign to maximize exposure and to help pinpoint specific times when the ads will show. This budget should get about 200-300 segments or spots per day. We know it works given the volume of happy testimonials that have come in telling us that “as soon as they drove by the billboard, they saw their ad come up”… and captured that moment of awe on their grad’s face. This is the same kind of response we get from a new-to-OOH business that sees their ad on a Blip Billboard for the first time ever.

BB: Is it $20 per day regardless of market, company? Location selected? Impressions delivered?
DF: Just like any Blip campaign, one can input any budget and we guide the buyer to give them the kind of exposure they want to achieve their outcome. For Blip’s Ads for Grads, we made it simple by recommending $20 after doing the math and figuring that this would provide optimal exposure for a very affordable price point. We’ve had individuals spend less or more at their own discretion.

BB: What is the payout to the OOH provider of each $20 bill?
DF: The OOH operator receives the majority of the campaign dollars. Ads for Grads is no different. Blip takes its commission which works at scale to automate both a self-serve experience for any kind of advertiser on our online platform, as well as the customer success folks who are constantly educating new-to-OOH users on how to make billboards a permanent and valuable part of their advertising portfolio.

BB: You mentioned “received hundreds of requests”  what does that mean?
DF:  The marketing outreach was confirmed and received by hundreds of thousands of individuals to whom we’re connected, of which we communicated to more than a thousand interested parties that know of a grad who could benefit from this. As of today, we have a few hundred campaigns across the country that have started to appear over the past few weeks A few dozen started a few weeks ago, while most of the campaigns are really picking up steam now as we enter the apex of the grad season.

BB: Are you saying hundreds have signed up using the automatic sign up and are on the streets?
DF: Yes.

BB: Have there been any requests which could not be fulfilled? Did Operators ask for this or is this a Blip initiative?
DF: We’ve been able to fulfill all requests so far from those interested in running a grad ad. While a handful of operators have been talking to us about what they can additionally do specifically, Blip came up with this campaign-at-scale idea several weeks ago while identifying how to galvanize interest in OOH during a very difficult time for businesses and individuals alike. Making parents and students happy while still maintaining our core business value to the operator has been great to see as it propagates through communities.

BB: How many ads are actually on the street?  You can use ones which already ran their 3 days in the past in the count.
DF: It’s hard to say how many are running at this precise moment due to the high volume and staggered start/end dates of each, (that count will be different by the time this article is published), but as mentioned earlier our running count shows hundreds of campaigns that have not just been committed to run by the time grad season is over, but have already run their 3 days or more. I’m hoping to see more than a thousand executed campaigns by the time the sun sets on the current grad season.

BB: Any area of the country where they are more popular?
DF: This campaign has universal appeal, so I’d say that the only reason we’re seeing a higher statistical occurrence of these campaigns in Utah is because of (1) Blip is headquartered in Salt Lake City and thus it is our most mature market, and (2) we received some special attention from local TV stations given the pride of what this local tech company (Blip) is accomplishing. Some links below:

BB: How is Blip getting the word out?  Are the OOH Owners doing anything to promote? What has been their response?
DF: Secret sauce :). Nah but seriously – we go deep and broad across a wide variety of digital marketing channels to get in front of millions of potential businesses. We leveraged our existing marketing engine to see who among our audience are parents of, or know of any graduating senior whose family would appreciate this effort. We encouraged them to spread the word too.

OOH owners have in general been very receptive to this and we definitely have a handful who told us they’d like to help promote it.

Our OOH Operator partners have 100% control and final approval over what appears on their boards. We’re also respectful of those media owners who aren’t as enthused about personal messaging appearing on their billboards. In those cases, we handle it case-by-case as part of our standard moderation process to address any concerns and get the ad up while adhering to operator requirements.

BB: Any final thoughts?
DF: It’s been an incredibly rewarding experience helping communities across the nation as part of our normal business. It has also demonstrated the power of what’s possible when making OOH accessible to everyone. Blip ultimately exists to make it as easy as possible for businesses of all sizes to leverage OOH in their long term brand-building strategy.

This is Los Angeles’ Newest Video Display and it’s a MONSTER!