"slap that quote on a Turnpike billboard.”

Everyone loves an underdog – especially one with spunk. When the Saint Peter’s Peacocks (15) took down Kentucky (2) and Murray State (7) in the NCAA last weekend, Judge Outdoor owner Marty Judge was inspired to donate space on one of his NJ billboards to show support for the Cinderella Hoopsters.

Well, he can’t take all the credit. He took his inspiration from The Star-Ledger sports columnist Steve Politi, who quoted Saint Peter’s coach — “I got guys from New Jersey and New York City. You think we’re scared of anything?” — and flippantly suggested someone “slap that quote on a Turnpike billboard.”

Well, that’s exactly what Marty Judge did. Then he took a picture of it and the rest is history. 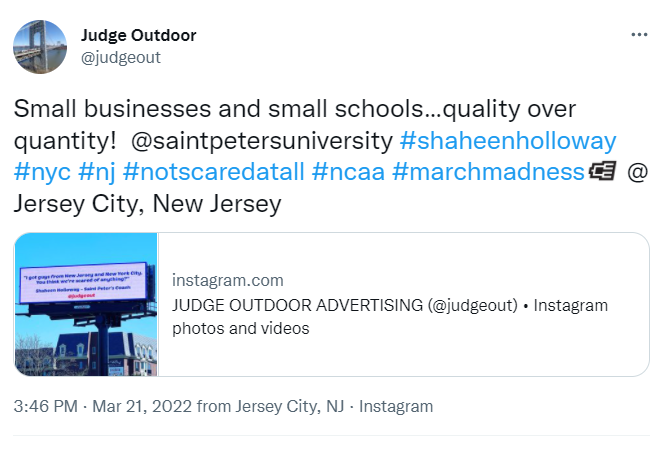 A testament to the virality of OOH, “it’s become the most famous little billboard in NJ,” said a pleasantly surprised Judge. When asked why his billboard has gained so much traction online, Judge said he believes it’s because “everyone likes an underdog story and I have to give credit to Steve Politi (@StevePoliti) for writing the article and then tweeting the picture of the billboard!”

While he hasn’t heard from coach Shaheen Holloway or anyone from Saint Peter’s, Judge will be rooting for the underdogs tonight. And if they win? “The spot will be up as long as they keep winning,” promised Judge. “But either way, they have provided an immense amount of inspiration for so many people!”