Here’s a trick question for you. How many OOH Company CEO’s in the last 10 plus years have experienced having a baby? I don’t mean being a co-parent or a Dad, I mean the whole shebang, caring the child, going through childbirth and bringing a child into the world. Are you cringing yet, because I think a few of you might be.

Ok, this was set up kind of easy because we all know the answer. The answer is none. That’s because on this planet you generally have to be a woman to carry a child and have a baby. And the last I saw there have not been any women CEO’s, or whatever title you would like to use, at the tippy top of the corporate ladder at any of the top 10 OOH companies. None. There have been a few Presidents who didn’t stay that long, but they were never the CEOs or the Chairman’s. They were never the top dog. Never the tippy top.

Look around, make some phone calls, look on the internets, you won’t find the head of any large OOH companies here in the United States that have a woman at the very top.

Sure you’ll find very competent and professional women at the top of our major associations, any of whom past or present could be an OOH company CEO, but they aren’t. In fact the associations I’m thinking of are mostly supported by memberships from the major OOH companies.

Which are all led by men. Mostly straight white men above the age 50. But we can save ethnicities and sexual preferences for another article, I’ll make it easy as this is strictly man vs woman. Guess who wins that match in my home.

Let’s get something straight here. I have no issues with any of these gentlemen who are the CEOs of all these OOH companies. I like them, all they are all fine men, some I’m proud to call my friends, well educated, well spoken and very smart. They really are good guys, this isn’t about them. It’s about the OOH system.  Which begs my thesis on why is there not a woman at the top of at least one major OOH company? Certainly they all have some spectacular women general managers, I know many of them, they are awesome, they are bright and they run incredible plants, some are in fact are smarter than their CEOs.

Yet the percentage of OOH advertising bought here in U.S. has hung around the 4% to 6% of total nationwide buys for several years now. It really hasn’t budged much, something they bring up at all the conventions. Funny you know who brings it up? All those heads of agencies that are you guessed it, men. They say that’s the biggest single fault in our industry here in the states that we cannot show serious overall growth when compared to other types of advertising. Really?

So there is a man on the big stage, talking about our lack of growth and he’s basically blaming all the men in the audience because they’re the guys who head up all the companies. And that includes the majority of the big ad agencies, the big printers and most of the nontraditional OOH companies. A sea of men. It’s like that Monty Python song. Men men men. I bet you’re humming it right now . But clearly the men men men are not moving the needle quick enough. 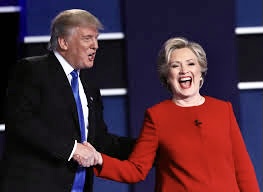 I think you all remember well, how five years ago when a woman, who many considered the most qualified person ever running for President of the United States, lost to a man. Like him or not that man was the least qualified person to have ever run for that office, let alone win. But the qualified woman lost.

How did that turn out for all of us!

Let’s go back further in time. 1991 to be exact, I worked for Gannett’s USA Weekend, the weekend sister publication to USA Today. We shared corporate office buildings at 54th & Madison as well as Roslyn, Virginia. It was a great job and I learned a lot. Coincidentally, both publications had phenomenal women Publishers, Cathy Black and Brett Popper. This was 1991. Ask anyone whoever worked for them and they will say they learned more about selling advertising and building their business then they learned from anyone else. At the same time there were other women publishers doing the same thing at the other large publishing houses like Condé Nast. They were killing it as we say in 2021.  One of those women was Suzanne Grimes. That name should ring a bell to those in OOH.

I know for a fact that either a Cathy Black or a Brett Popper or a Patricia Haegele who’s a group publisher at Hearst Magazines, and another former Gannett executive, could all easily move into a CEO position at any of these OOH companies and without a doubt raise those revenues. They are smarter, they are faster, they are more aggressive, they have way more contacts in the industry, and they get the most out of their staff. They all have or had great relationships up and down at all the big agencies. And because they are women in a male-dominated business of advertising in NYC where there was tons of competition back then in the print world, these women were that much more competitive, they were that much more tough. Believe me when I say I’ve seen all these women in action and I’ve seen all the current men in action, and there is a difference.

Again, not slighting the current OOH CEO’s, as it’s the status quo, it’s what we’re all used to. To make the point of what I believe that it could be so much better if even one OOH company took the jump and handed the reins over to a woman. Just think how it would have an affect on her fellow CEOs. How much more they could learn.

With no men above her. She’s it.

A Preview of the DPAA Video Everywhere Summit — In Conversation #withAmex