Six to eight million animals are brought to shelters annually, of which an estimated 50% are subsequently euthanized, including 2.7 million considered healthy.

Animal shelters in California are full, and experts report that it tends to get worse after the 4th of July Celebrations. But a group of community leaders has teamed up with one Los Angeles-based billboard advertising executive to do something about it.

Under the direction and leadership of Brian Alexander, the principal of a Los Angeles-based media buying agency specializing in billboards called Billboard Connection, START RESCUE has launched a billboard campaign of more than 25 billboards in a new effort to encourage adoption and bring awareness to those who may not know what’s happening at their local shelters.

“I was moved and inspired by the work that START RESCUE was doing – literally saving the lives of dogs and cats that would be euthanized in shelters – by picking animals up from shelters and transporting them to qualified Rescue Partners where they are lovingly prepared for adoption. It pulled at my heartstrings,” said Alexander. “So, I volunteered to serve as liaison to get the widest possible exposure for their campaign with the fewest dollars. I reached out to multiple billboard companies in Southern California to get the best deal, and many of my colleagues and their companies stepped up to do the right thing.”

These billboards will deliver over 2 million weekly combined impressions. “The usual cost for these billboards would be over $350,000,” said Steve Spiro, President and Co-Founder of START RESCUE. “But through Brian’s excellent negotiations and the kindness of these companies to our nonprofit, our campaign will cost less than $50,000 to bring more awareness to the shelter system and the simple but heartbreaking fact that animal shelters are full and, as a result, dogs and cats are being killed. People should rescue their next pet. A heartfelt thank you goes out to all the billboard companies that stepped up and provided their truly amazing help with this project, including Sun Outdoor, Bulletin Displays, Clear Channel Outdoor, Lamar and Outfront Media.”

Most humane societies, animal shelters, and rescue groups urge animal caregivers to have their animals spayed or neutered to prevent the births of unwanted and accidental litters that could contribute to this crisis. 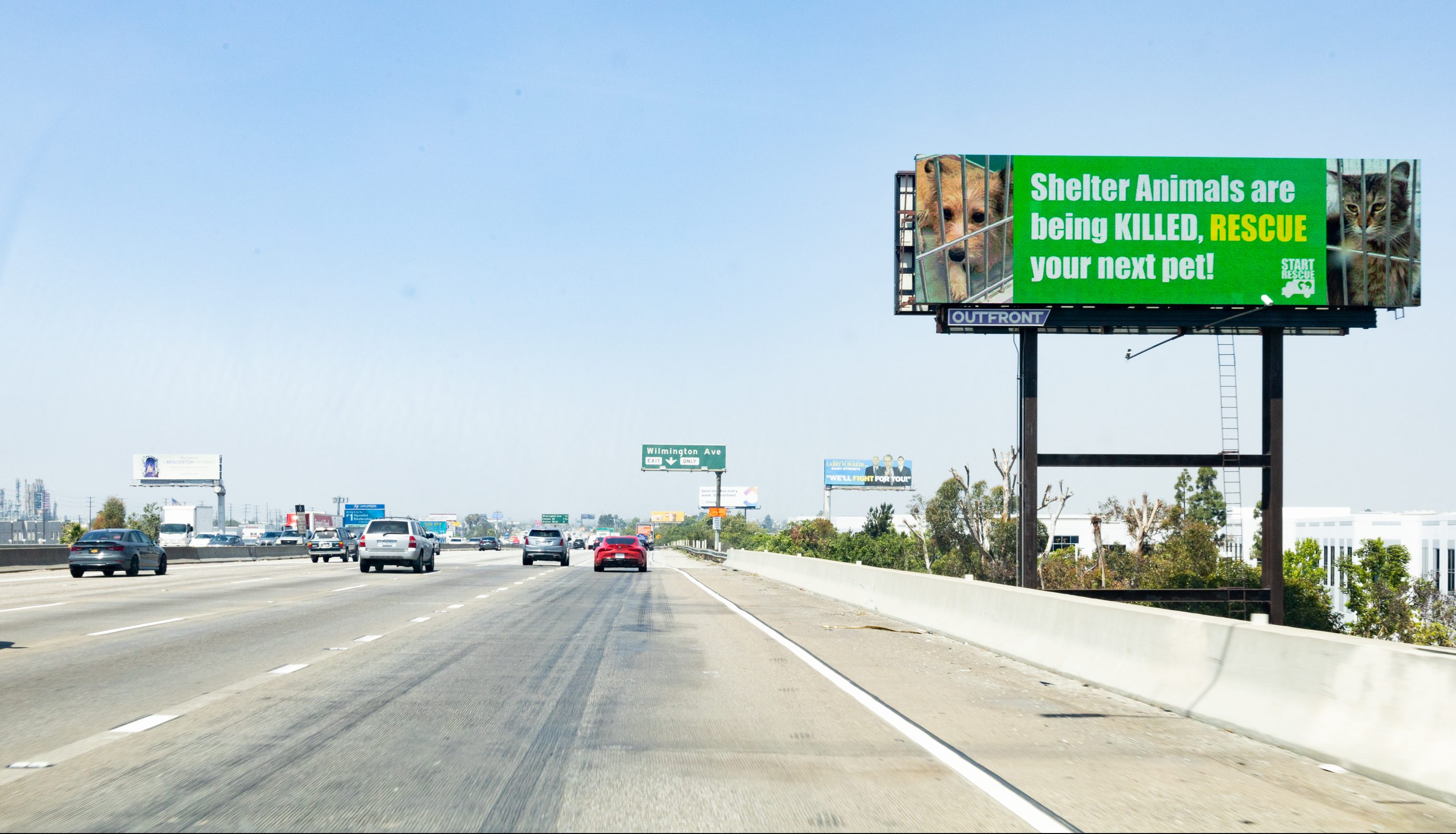 Transportation is Part of the Solution

START RESCUE only transports animals from Southern California shelters to their contracted partners in Oregon and Washington State.

The campaign of digital billboards started in late Spring and will continue running into the Summer months, with one prime billboard running for an entire year on the 405 San Diego Fwy (the busiest freeway in the U.S.) in the South Bay area of Los Angeles County. In addition, the billboard advertisements can be seen in various locations within Los Angeles County, the Inland Empire in San Bernardino & Riverside Counties, and the Bakersfield area.

START RESCUE is asking for your help to donate to this vital campaign and the plight of all our beloved 4-legged animals. The more donations received, the longer the campaign can be extended. Please note that START (Shelter Transport Animal Rescue Team) is a CA 501c3 organization TAX ID # 45-4258426, and all donations are tax-deductible.

If you have any questions, please email Steve Spiro: steve@startrescue.org

About Billboard Connection L.A.
Billboard Connection in Los Angeles is a one-stop media buying agency specializing in billboards and select out-of-home (OOH) advertising, serving advertisers and agencies of all types and sizes across all industry sectors. Experienced and dedicated outdoor advertising specialists have access to 100% of all available billboards and OOH media.

About START RESCUE
An estimated 6 to 8 million dogs and cats are euthanized annually. Millions more are abandoned, only to suffer illness or injury before dying. Our mission is to end the suffering of innocent dogs and cats by reducing the number of unwanted births. START has funded over 9,000 Spay/Neuter surgeries, and we continue to increase this number with your support. Collectively, our goal is not only to reduce the number of animals “in” the shelter system but, more importantly, to reduce the number of animals “entering” the shelter system and prevent unnecessary killing due to lack of kennel space.