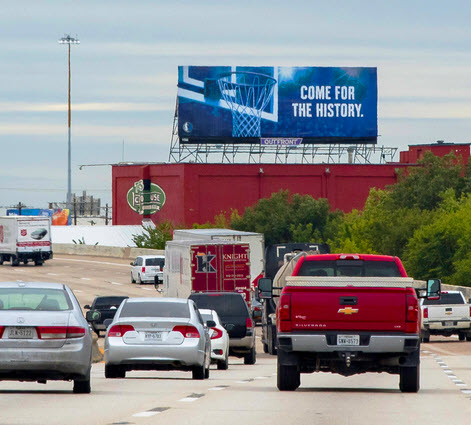 Dallas Mavericks ShOOHt and Score with OUTFRONT Billboard Triple Play Drive into downtown Dallas and you’ll feel like you’re sitting courtside watching Dirk Nowitzki sink his signature jump shot with this larger than life creative featured as part of the new Dallas Mavericks #OOH campaign. The Mavs took advantage of OUTFRONT’s iconic over 2.4 million impressions per week, bulletins to tell the story of their 21 season history with Dirk and bring you into “the future” featuring 1st round draft pick Luka Doncic, who joined the team in 2018.

The 1st board featuring Dirk is brought to life using an oversized extension of the basketball, the second spectacular focuses your attention to the basket, and the third board spotlights their new superstar, Doncic. This high-traffic location was chosen as a key part of the Mavs OOH campaign because it offers over 2.4 million impressions per week.

Someone in Dallas writes great copy!  Thank you OUTFRONT Media.

Shooting Your Billboard in the Foot