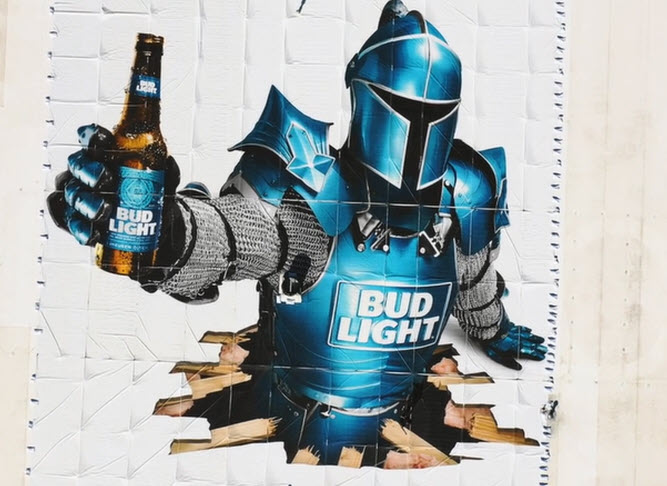 There was nothing “super” about the abysmal 16 total points scored on the field during Super Bowl LIII in Atlanta’s Mercedes-Benz Stadium, but all the better for us in the advertising world. Per usual, creative advertisements and (it pains me to say) Tom Brady stood victorious at the end of the week. And I bet you were aware of even if you didn’t watch a second of the (non)action.

The unprecedently-edgy Bud Light “No corn syrup” ads and Bublé-cameoed Bubly commercials were highlights during the game, seen by 98.2 million television viewers (down 5% from last year’s showdown and a 10-year low). Media coverage in Atlanta began well before the opening kickoff, coverage you might have seen without ever stepping foot in town or turning on your TV. But how?

As it turns out, those that spend $4,380 per ticket, the average StubHub ticket price, to attend the event really want their friends and family to know. In 2019, that means millions of posts, shares, mentions, hashtags, stories, etc. Gone are the days of gathering around your 5”x7″ prints in the kitchen from your disposable. 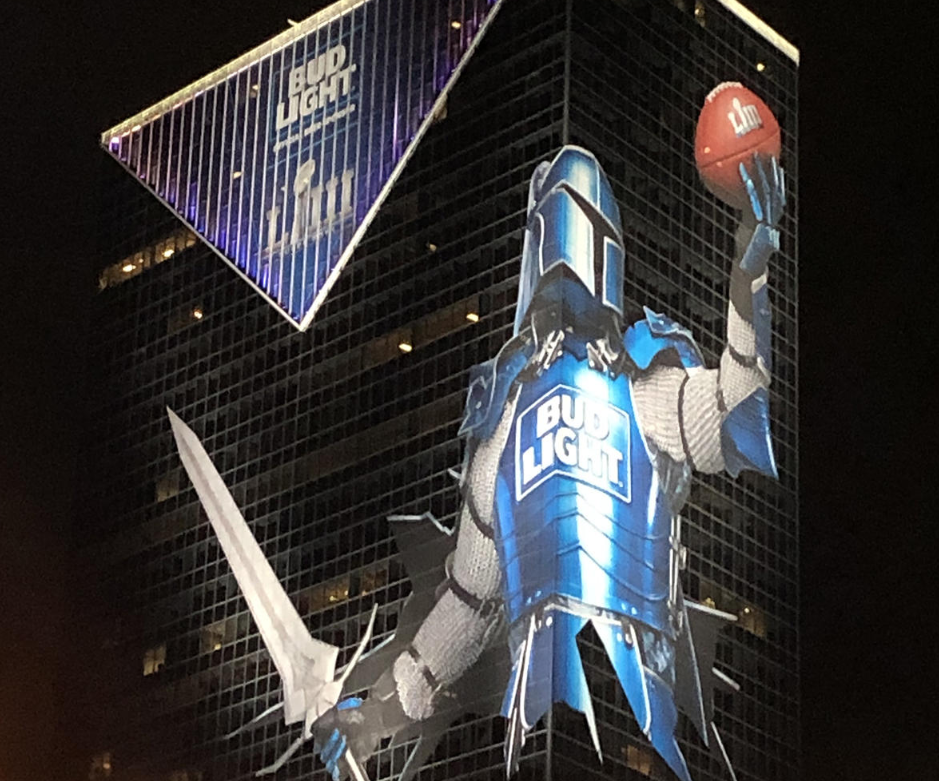 In Atlanta, a certain armored Knight photobombed thousands of these photos, as excited fans were awed by the magnitude and realistic look of the Bud Light Knight building wrap overlooking Centennial Olympic Park: 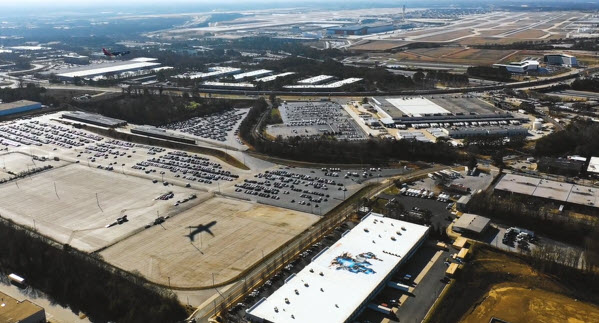 Conceived and managed by Wasserman Media Group and executed to perfection by bluemedia, the Centennial building with the Bud Light Knight was just one of four Atlanta skyline buildings wrapped by bluemedia, totaling over 129,000 square feet of displayed material. While the downtown Knight stole the show as an on-site guard and weekend icon, he also made appearances before passengers even set foot in the city. FlyBy Ads teamed up with Bud Light, as well, to display two 20,000 square foot signs situated on the flight paths for inbound planes. With incredible creative work by Weiden + Kennedy and a collaborative partnership with CircleGraphics, these first-of-their-kind rooftop signs were a surprising welcome to visitors thirsty for a cold one. The bluemedia Knight activation alone required a week and a crew of 7 people, but the national attention the #OOH formats garnered made these efforts well worth it. And herein lies the beauty of bold and clever #billboaOut of Home displays…

Just one post of Wasserman and bluemedia’s Knight wrap received over 13,500 views and 3,900 likes, while a video post of the FlyBy Ads rooftop sign received over 50,000 views

If the content and format is unique, creative, and catchy, the display becomes a dual-threat, activating an OOH AND social media campaign in complimentary fashion. Today’s culture and online metrics suggest that people like to snap and share photos of the extraordinary, which includes exceptional content on a #billboard, or even the side or rooftop of a building. Views are then no longer limited to the passerby, but also open to an impression pool of the millions checking their Instagram account from wherever they are in the world. Just one post of Wasserman and bluemedia’s Knight wrap received over 13,500 views and 3,900 likes, while a video post of the FlyBy Ads rooftop sign received over 50,000 views. And that doesn’t account for the in-person pictures that were posted and tagged of the same displays, which were then shared and engaged with by their followers.

This theme is one to embrace as it is not going away; social media is complimentary to OOH, and vice versa. The results suggest two things: creative OOH that pushes the envelope is imperative and tying in a social media aspect to an OOH campaign can add significant value to a brand.