“The red line is now the blood line.” 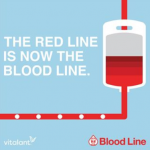 Pro-bono work from We Are Unlimited. We Are Unlimited was formed as a dedicated shop for McDonald’s work. Its plan has been to eventually seek outside work, which it’s now doing. Omnicom sibling media agency, OMD Chicago is also involved in the project.