OOH, Its Up All Over

Election Day is here.  Wealthy Minneapolis Family, Pohlads, who own the Minnesota Twins, unselfishly dished out $37,000 for Metro Transit and 80 faces on light rail cars, bus shelters and buses for the election.  The simple, Out of Home engaging copy is appealing— ‘Who Wins Matters.’   The website for the campaign is as uncomplicated as well ⇒ Who Wins Matters 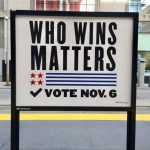 It is a unique campaign, as the agenda is to encourage voting while not favoring any political party or candidate. More of the nonpartisan billboards have gone up across the state.  The chief elections officer for the Secretary of State for Minnesota, Steve Simon, saying about the #OOH campaign, “It’s up all over.” The Pohlads’ campaign is unique because it’s nonpartisan and so widely distributed. “This one has captured attention.”   Quite an endorsement.

“It’s up all over. …and so widely distributed.  This one has captured attention.”

We will be watching if it positively affects the voter turnout in the State known as the ‘Land of 10,000 Lakes.’

Share your ‘I voted’ photos with OOHTODAY and Win