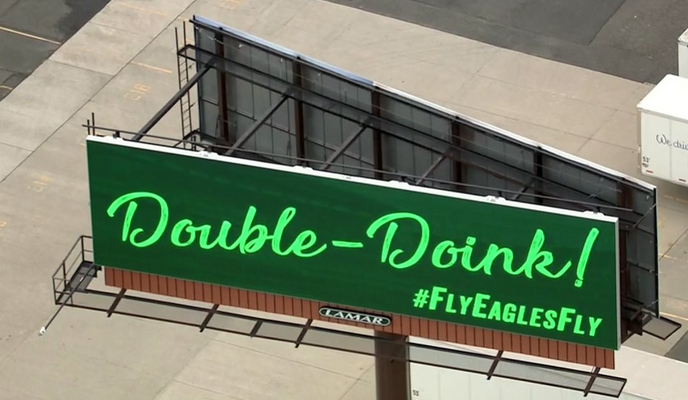 Double-Doink is appearing throughout the city in Out of Home of the famed missed field goal attempt.
You know the one. The final seconds of last Sunday’s NFL NFC Wild Card Divisional Playoff game between the Eagles and the Chicago Bears, a Philadelphia lineman, DT Treyvon Hester (90) was credited with a blocked kick on Chicago Bears kicker Cody Parkey’s late-game attempt. Hester got a couple of fingers on the Bears field goal attempt to cause the football to hit the left post of the upright and then bounced off the cross-bar back to the field of play denying the Bears victory. Doink Doink. Heart breaking for the Bears. It was elation for the city of Brotherly Love.

#OOH is playing a role as it always does, for Philly football fans, touting the victory. Billboards large and small are replaying the now famously called, Double-Doink moment.  See examples of the opportunity of Digital OOH providing immediacy of message starting with Lamar Advertising below. 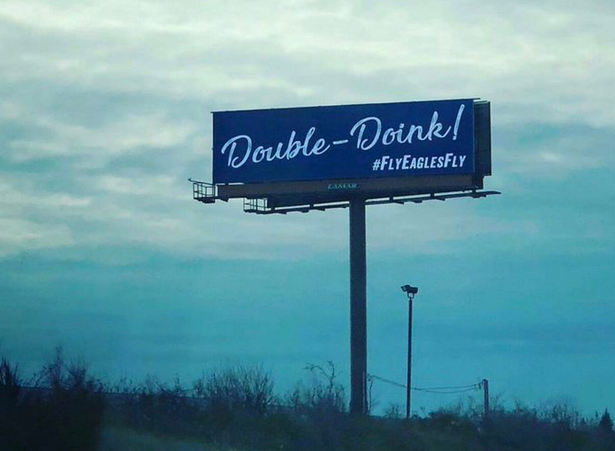 The PECO Building is a 25-story skyscraper in Philadelphia named for the Philadelphia Electric Company.  Their display, atop the company’s headquarters, is replaying the Double-Doink.
See the video below.

The double-doink in bright lights high above the city of Philadelphia.

That's right, the PECO Building is showing an animation of the famous blocked kick. pic.twitter.com/UiicTFvhYA

On a personal note: I have been a Bears fan for over 50 years. I am still deeply distraught.