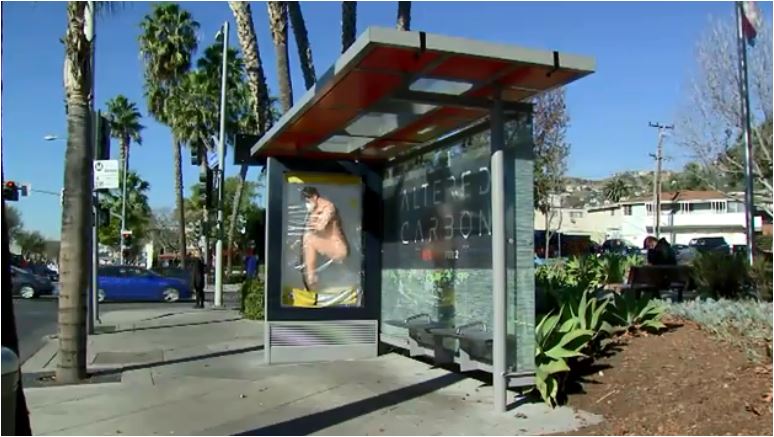 A naked man ‘sitting’ in the advertising display case of a bus shelter is ‘weird’ and curiously interesting.  How did he get in?  How will he get out?

Only on Santa Monica Boulevard, in West Hollywood, would one find a nude man ‘suspended’ in the ad display case of a transit shelter.  The ‘man art’ is for a new Netflix show called, “Altered Carbon”.  People interviewed near the bus shelter agree, its ‘creepy’. Click here to see the interview ⇒ Fox 11 News interview worth watching  Apologies, I could not delete the brief ad from the Fox News video.

Persuasive ‘street art’, creepy or not, the design execution succeeds. The show looks like a winner as well. Click for 2 minute movie trailer⇒ Altered Carbon Trailer  No ad on this video.

Netflix’s sci-fi epic “Altered Carbon”, is described as a ‘jaw-dropping’ drama set to the future in 300 years, where science provides digitally stored consciousness allowing people to change and upgrade their bodies.

The show premiers the Friday, February 2.  What do you think?  Has the creative in this OOH transit shelter aroused your curiosity to make you want to tune in?  Count me in, that is, as soon as I complete watching Mindhunter also from Netflix. 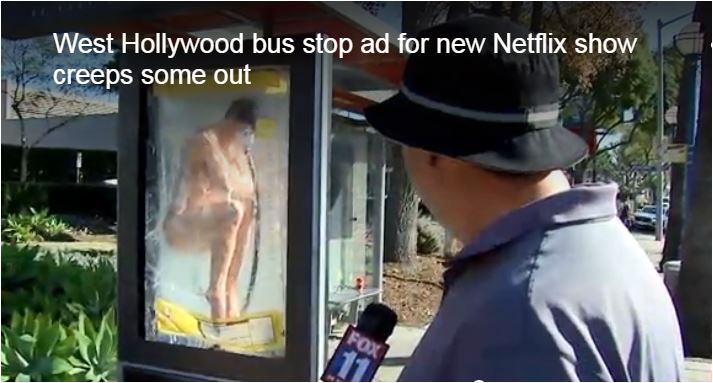