Omaha's Charge of the Light Rail

Omaha’s Charge of the Light Rail

Omaha, Nebraska, is home to the College World Series; the Lied Jungle, the largest indoor rain-forest in North America; Desert Dome, the world’s largest indoor desert; and an authentic Omaha Reuben sandwich. I am also thinking lots of steak houses and Warren Buffett as well. Omaha is 380 miles from Minneapolis, Minnesota and 5 hour, 45 minutes drive. But you might not realize that it if you were in Minneapolis this week, because Omaha came to Minneapolis.

Visit Omaha, (VO) the city’s tourism organization, wrapped the Minneapolis Metro Blue Line light rail, as part of its “52 Weekends” advertising campaign promoting Omaha as a year-round destination. Super Bowl LII (LII is Roman Numerals for 52) is also taking place while the wrapped train is running in Minneapolis. Nice tie in with the corresponding 52’s!  Note, Vegas has the over under at 48, with the 52’s reigning here, take the over.   Back on the train. Love the color combinations used during the dull grey days of winter in the north. The design works.

The train route extends from downtown Minneapolis near Target Field, where the MLB Twins play, to the southern suburb of Bloomington.  Along the way is a stop for the US Bank Stadium where the Super Bowl will be played.  .

The train ads cost $50,000.  And according to a Visit Omaha spokesperson, they did not have to pay a premium price, even though the ads will be on the train for the Super Bowl  It gets better for Visit Omaha. The ads, debuted January 10 and will run through April 29.  One would think a 52 week plan would have been the order of the day.  Finally, there is bonus. Metro Transit in Minneapolis estimates the train will be seen more than 6.8 million times from January 10th through April 29th and the estimate does not include the additional Super Bowl numbers who hit town for the weekend.  Added impressions!

The light rail in Minneapolis is one of the nicer rail rides in the Country. I have taken this train, formerly called the Hiawatha Line, from the airport to downtown many times.  The physical ‘canvas’ the train provides typically delivers an attractive and superior image for the advertiser. I do not ever recall, of the dozens of different wrapped trains, seeing a bad design.  Below photos of more wrapped trains of the Blue Line from years past. 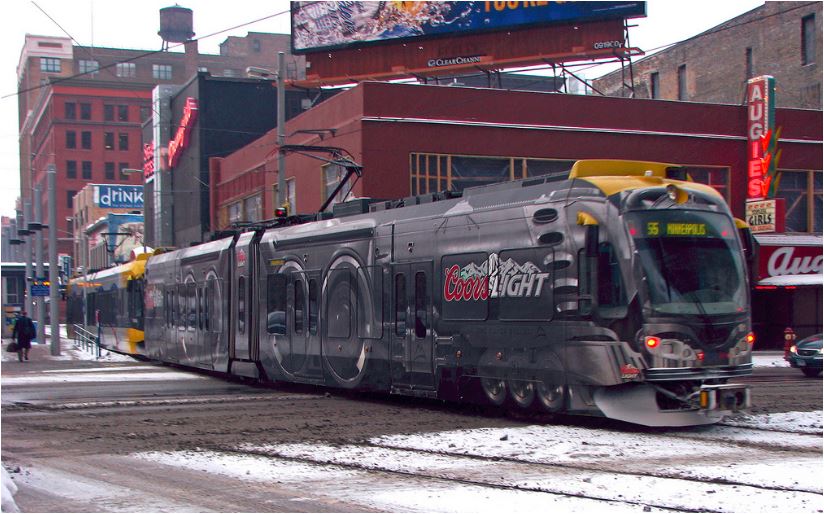 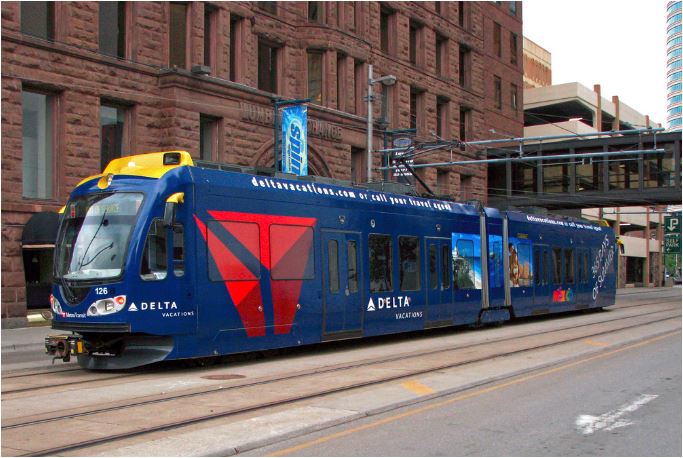 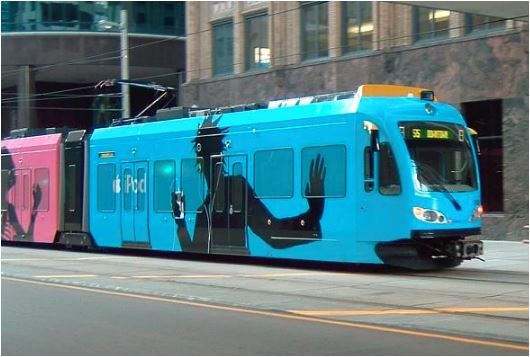 Hey its OOH, ya gotta travel, enjoy the view