Mad Dog Believes in OOH and is Buying, You Need to Call Them NOW 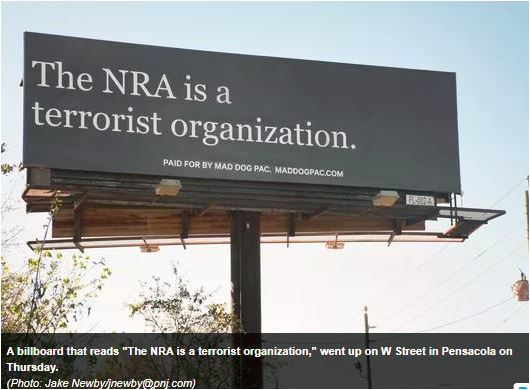 Another billboard targeting the NRA, has shown up. This time, the Outdoor Advertising will stay on the street as it was purchased by an organization that raises money privately to influence elections or legislation, called Mad Dog PAC.  Mad Dog Political Action Committee was registered December 2017 by Claude Taylor.  Taylor, a former White House staffer under the Clinton Administration, purchased the billboard in January this year in Pensacola, Florida.  The message, on black background in white letters reads, “The NRA is a Terrorist Organization.”  This group obviously believes in OOH and is buying.  If you are an Outdoor Owner, call them now!

Mad Dog PAC’s billboard campaign targets House Republicans.  Mad Dog PAC funds the billboards with donations through its website.  Here is an unofficial schedule, a ‘Billboard Progress Report,’ of the markets and office holders they are taking aim at.  Consider contacting Mad Dog / Taylor if you have OOH coverage in the ‘Coming Soon’ markets. 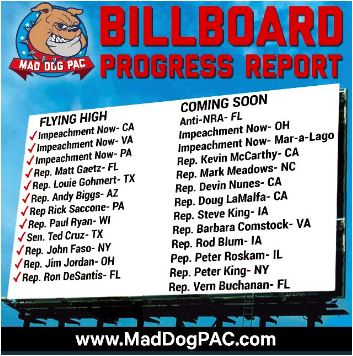 Mad Dog, claims to currently have a “28 or 29” billboard campaign scheduled throughout the country.  Funding for the Out of Home campaign has been via donations from 3,000 to 4,000 people.

Mad Dog PAC, says it will place more anti-NRA/anti-Republican billboards locating them in traditionally red states.  Pensacola, is the first, with Pittsburgh scheduled next, followed by another in PA to be determined.

Taylor, who resides near Washington, D.C., said he is under contract with more anti-NRA billboards in Oklahoma, Texas, Nevada, Tennessee and North Carolina, and are scheduled to begin “very soon”.

An example of one of the next designs (“softer design”) is below, scheduled for 1) Dallas, 2) Nashville, 3) North Carolina, and 4) Reno, Nevada.

A Sure Fire Way to Increase Effectiveness of OOH Ads

California Bureau of Cannabis Control has 30 days to Billboard Directive

Bringing a “FRESH” New Advertiser to Out of Home