Anybody can (and just might) create organic political ads

We are sharing a superior post coming from the Outdoor Advertising Association of America, and the Executive VP of Governmental Affairs, Ken Klein.  Klein penned the article earlier this week with the primary focus on the OOH political buyer called Mad Dog.  Mad Dog is the name of the liberal political action committee (PAC).

Klein’s observations are not limited to the Mad Dog PAC and their work.  What makes the post stand out is his powerful insights to political OOH buying, funding, legislative control and historical information.  Ken Klein is truly a billboard insider when it comes to delivering the message for Out Of Home, and specifically as it relates to political and governmental affairs.

If you are budgeting for political sales dollars this year, we strongly recommend reading.
Thank you to the OAAA for the opportunity to share Ken Klein’s post.

DRIVING ALONG INTERSTATE 70  —In political bellwether Ohio, a sharp-looking billboard stands out along the high-volume Interstate approach to Columbus: IMPEACHMENT NOW. 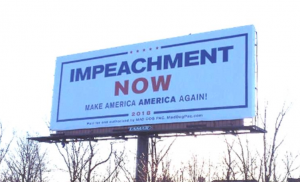 Who put that message here, in the heartland, my Ohio in-laws wanted to know. The answer: a traveling photographer named Claude Taylor, based in Silver Spring, MD . . . a rambunctious alum of the Clinton White House who is channeling today’s political angst into crowd-sourced billboards nationwide.

On average, Mad Dog PAC pays $5,200 per billboard, with 43 up or under contract and more on the way.

Ad-spend forecaster Borrell & Associates predicts $8.5 billion in political advertising in the 2018 election, up 2.5 percent over the last mid-term election in 2014. More than 70 percent of those dollars will go to broadcast TV, digital, and cable, says Borrell. The out of home medium will nudge a 4 percent overall share.

Perhaps a pittance, Mad Dog’s billboards and others like them reveal a peek at trends in political messaging.

Anybody can (and just might) create organic political ads

In late 2017, a corner of social media stewed with interest about whether a new congressman from Florida had been pulled over for impaired driving. If so, how many times?

That curiosity spilled over to a billboard. To pay for the ad, Taylor set out to raise $5,000 online via GoFundMe. When nearly $6,200 arrived in 16 hours, he posted thanks and stopped soliciting. In December, Taylor registered the Mad Dog PAC with the Federal Election Committee (FEC). Four days before Christmas 2017, Mad Dog PAC spent $4,000 for billboard advertising in Florida, according to FEC records.

“We’re learning to fly while we build this plane,” says Taylor, a novice at managing a crowd-funded billboard campaign. 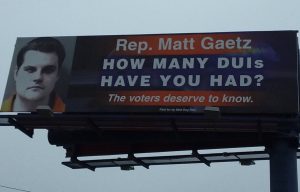 The freshman congressman, Mark Gaetz (R-FL), responded to the Gannett-owned Pensacola News Journal: “Someone must be noticing my work,” referring to Gaetz’ criticism of the FBI’s Trump-Russia probe. “It’s clear retribution for my work on the Judiciary Committee, and I don’t mind at all.”

YouTube also has lowered the barrier for entry into political advertising. On February 10, 2016, a Bernie Sanders video went from 1 to 3 million views after his staff tweeted it. The next day on MSNBC’s “Morning Joe,” Joe Scarborough praised Sanders’ team for producing great advertising.

However, filmmaker/fan Jonathan Olinger made the spot – not the Sanders campaign – and released it in his free time. Homemade ads reach millions.

Thirty-second political spots will get plenty of airtime, thanks to inertia and ease of buying, plus the ability of sound and sight to connect emotionally.

Like overall ad spend, political ad dollars are migrating to digital for its ability to match message to audience, one to one.

“Television advertising continued to receive the lion’s share of media dollars, but we may look back on 2016 as a watershed moment when campaigns began to invest more heavily in digital campaigns,” says a January 2018 report from the Bipartisan Policy Center.

Many of Mad Dog’s billboards are publicized by local mainstream media and social media, a phenomenon in the campaign world known as “free media” or “earned media.”

“The line between ‘purchased’ and ‘earned’ media becomes increasingly blurred in the digital age,” the Bipartisan Policy Center report said, “as campaigns and outsiders pay for armies of digital volunteers (let alone automated accounts or ‘bots’), who then surface content on social media that is functionally indistinguishable from other peer-to-peer communication.” 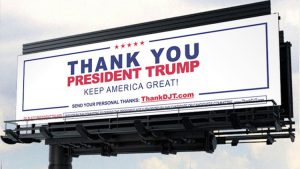 Affection for the negative

Like many political ads on the air, Mad Dog’s billboard messages are hard-hitting, even incendiary. Taylor’s PAC called the NRA a “terrorist organization,” generating coverage in The Hill in Washington, DC, that was shared nearly 10,000 times.

Billboard operators have no obligation to accept controversial political ads; sometimes they decline.

When Ivanka Trump visited Iowa on March 19, a group called Progress Iowa tried to buy billboard space to criticize policies of the Trump Administration and Governor Kim Reynolds. A billboard office in Des Moines refused to post the ad.

“The billboard industry is Calvin and Hobbes” on political ads, says Kerry Craven, Mad Dog PAC’s Logistics Manager, a former film producer based in Baltimore who buys billboards for Mad Dog PAC. Tolerance for controversy varies from company to company, and sometimes office to office within the same company.

She has a point. But roadside signs calling for impeachment are political tradition, including billboards urging impeachment of Presidents Obama and Bush. 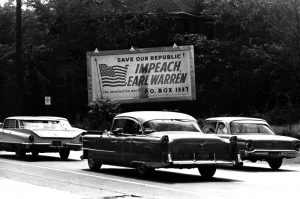 Connectivity in those days – if such a term was in the vocabulary – meant seeking more information from a Post Office Box.

Today, the call-to-action on the pro-Trump billboard asks citizens to send online personal thanks to ThankDJT.com.