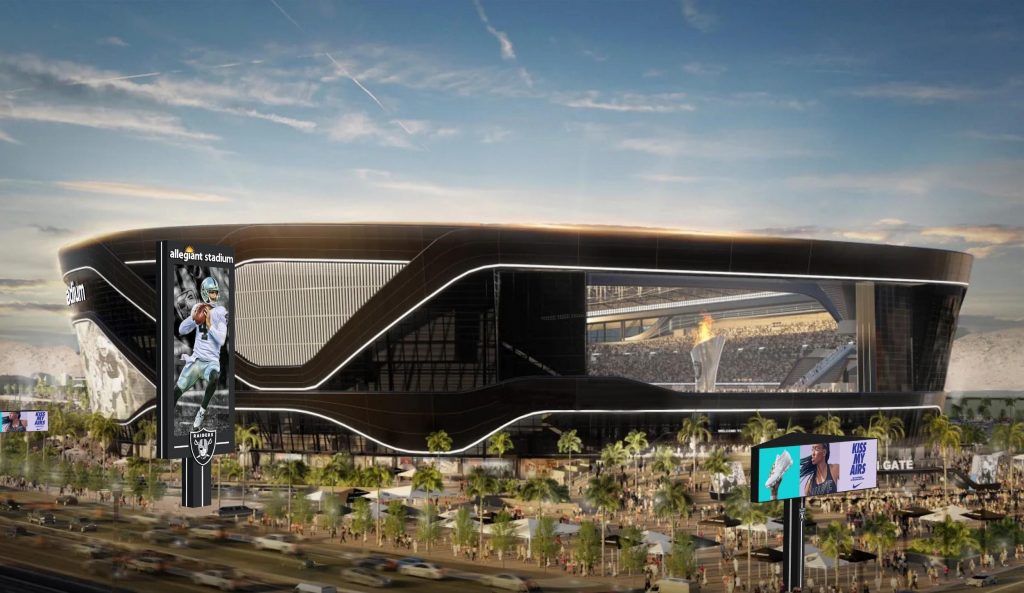 Baton Rouge, LA – – Lamar Advertising Company, one of the largest outdoor advertising companies in the world, has successfully negotiated to be the exclusive out of home advertising provider on the site of the brand new Allegiant Stadium, home of the NFL’s Las Vegas Raiders.

Lamar is deploying nine off-premise digital billboard displays for general advertising, reaching fans as they go to and from the stadium and the airport, as well as a large on-premise, full-motion digital marquee unit for exclusive use by Allegiant Stadium and the Raiders.

“There is so much excitement and anticipation for the opening of the Raiders’ new stadium and we are thrilled to be a part of it,” said Christopher Prickett, Vice President and Territory Manager of Lamar Advertising Company. “Bringing together two iconic brands, Lamar and the Raiders, in the fastest-growing sports city in the U.S. is a testament to the vitality of our respective businesses. We look forward to giving advertisers the opportunity to engage with football fans and event attendees at the stadium in a meaningful and memorable way with our new inventory.”

“The Raiders are excited to partner with Lamar Advertising, connecting the organization to one of the largest outdoor advertising companies in the world,” said Raiders President Marc Badain. “The digital billboard displays and the full-motion digital marquee at Allegiant Stadium will not only reach visitors on game day, but will serve to further connect the team to Raiders fans everywhere.”

Due to open for the start of the 2020 football season, Allegiant Stadium will also serve as the home to the University of Nevada-Las Vegas Rebels football team. The new stadium will have a seating capacity in excess of 65,000 and will serve as a major concert and entertainment venue in Las Vegas.

About Lamar Advertising Company
Founded in 1902, Lamar Advertising Company is one of the largest outdoor advertising companies in the world, with more than 390,000 displays across the United States and Canada. Lamar offers advertisers a variety of billboard, interstate logo, transit and airport advertising formats. In addition to its more traditional out of home inventory, Lamar is proud to offer its customers the largest network of digital billboards in the United States with over 3,600 displays. Visit www.lamar.com

OOH TODAY believes all voices, not just the loudest, must be heard 4877 posts 617 comments

#FauciArt Hitting the Streets of Los Angeles and NYC