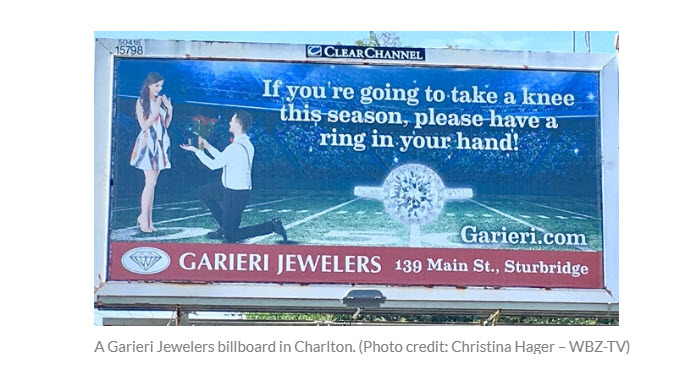 Take A Knee’ Billboard. But is it Increasing Sales?

Here is a post from the Boston CBS affiliate Channel 4 WBZ.  Reporter Christina Hager says it so well, I am not even going to try to reposition or add to the story.  Check out the video with the Garieri Jewelers store owner.  He is a great supporter and success story for #OOH. It works and we are eager to hear about his sales after this.  Maybe we can obtain Clear Channel Outdoor comments.

What do you think? Worth the headache for your plant /market?

STURBRIDGE (CBS) – A Massachusetts business has found itself in the middle of the debate over NFL protests during the national anthem.

Sturbridge-based Garieri Jewelers purchased a billboard in Charlton that shows a man proposing to a woman on a football field.

“I have between three and five seconds to get your attention while you’re driving by,” said Scott Garieri, who is getting more attention than he bargained for.

His billboard reads: “If you’re going to take a knee this season, please have a ring in your hand!”  “That’s what we do,” Garieri said. “We sell engagement rings.”

“That’s what we do,” Garieri said. “We sell engagement rings.”

But as President Trump lashes out at Nike’s new Colin Kaepernick ads and NFL players are kneeling during the national anthem to protest racial injustice, the phrase “taking a knee” touches a national nerve.  “We didn’t even think, we just thought, well a good play of words,” Garieri said.

“We didn’t even think, we just thought, well a good play of words,” Garieri said.

And while some got a chuckle out of it, a crowd of critics hit social media, calling it racist, disgusting, bigoted. One even told Garieri’s daughter to kill herself and other graphic threats.

“And they’re going to urinate on our sidewalks and vomit on our showcases. It’s like, you know, what’s wrong with people?” he asks.

It’s not the first time Garieri has put up a controversial billboard. Last year it read, “Make her speechless…for a change.”

“It is a very sensitive subject, and it’s just not something to be joked about or played around with,” one driver told WBZ.

Garieri says the billboard will not come down until after the football season. “It’s not coming down,” he says.

No matter which side of this issue you take, bottom line, this #billboard has people talking, and it’s spreading the name of this jewelry store, which is what any advertisement aims to do.