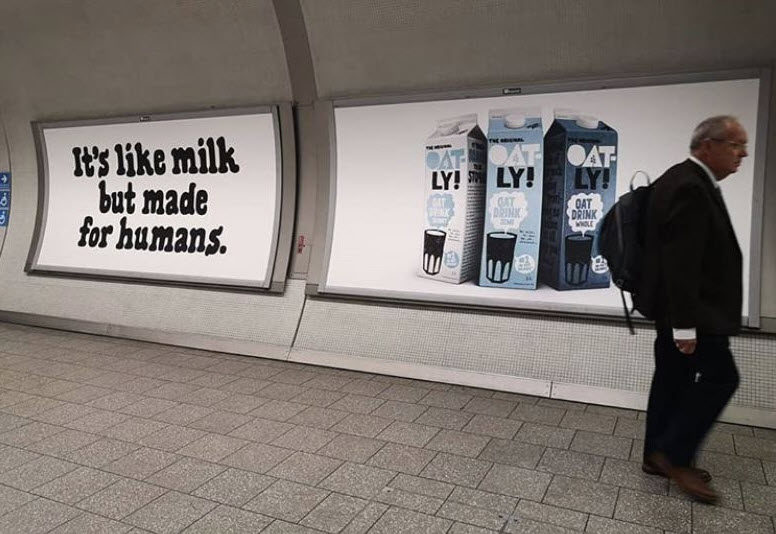 Oatly – a milk-like product created from oats – has brought ‘It’s like milk, but made for humans’ Out of Home campaign to London. Advertising in the London underground,  Oatly, took a beating in their home country of Sweden after being sued by the Swedish Dairy Association for their marketing.  Using OOH, who can doubt the stir they caused?  OOH is so damn effective and on ‘the streets’ 24/7, the probability of being seen by every daily farmer in Sweden, surely caused a ruckus greater than a little spilt milk.

Continuing the Oatly way of ‘encouraging eating stuff that can be grown, instead of growing stuff to feed animals and then eat them.’  Oatly’s ‘oat based drinks, are made for humans, rather than for baby cows.’

Using the term ‘baby cows,’ we call them calves in the US, is likely to piss off the baby cow lovers who stand on opposite sides of the barn. I am sure the American Dairy Association loves them as well.

Not that you want to disturb the American Dairy Association, we recommend calling on Oatly.  They obviously like #OOH. With only 2 stores within 2 miles of where we live in Northern Virginia, which we don’t shop, we will not be trying Oatly soon. Distribution may be a real excuse.  Start with the link to the story from The Drum below.

YOU CAN’T TAX THAT BILLBOARD!