Google Do It” Launches DOOH Campaign 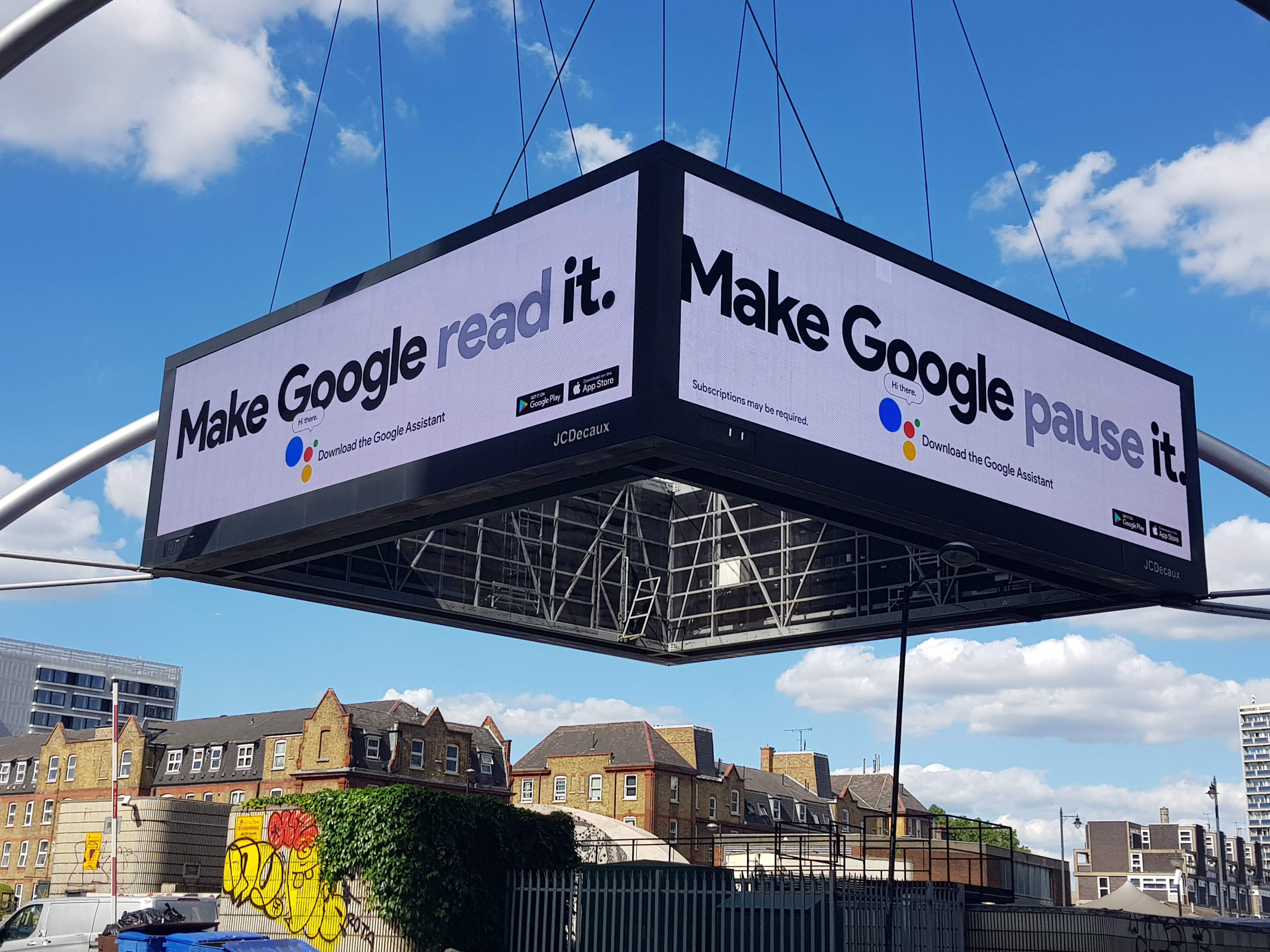 “Make Google Do It” Launches in UK Wide DOOH Campaign

Google has extended its “Make Google Do It” campaign, in a clever UK-wide digital OOH push. The campaign promotes the variety of everyday tasks that Google Assistant can help with, in the moment you need it most. The activity runs across transit, retail and city-centre locations until 8th July, with an extended run at Old Street roundabout, Google’s long-term hold site in London.

The UK digital OOH iteration of ‘Make Google Do It’, uses two creative threads. The first features the Google Home Mini and highlights the versatility of Google Assistant, its main product, by demonstrating how it can help to “Play it. Skip it. Time it. Dial it. Forecast it. Remember it. Schedule it. Prep it. Do it”. 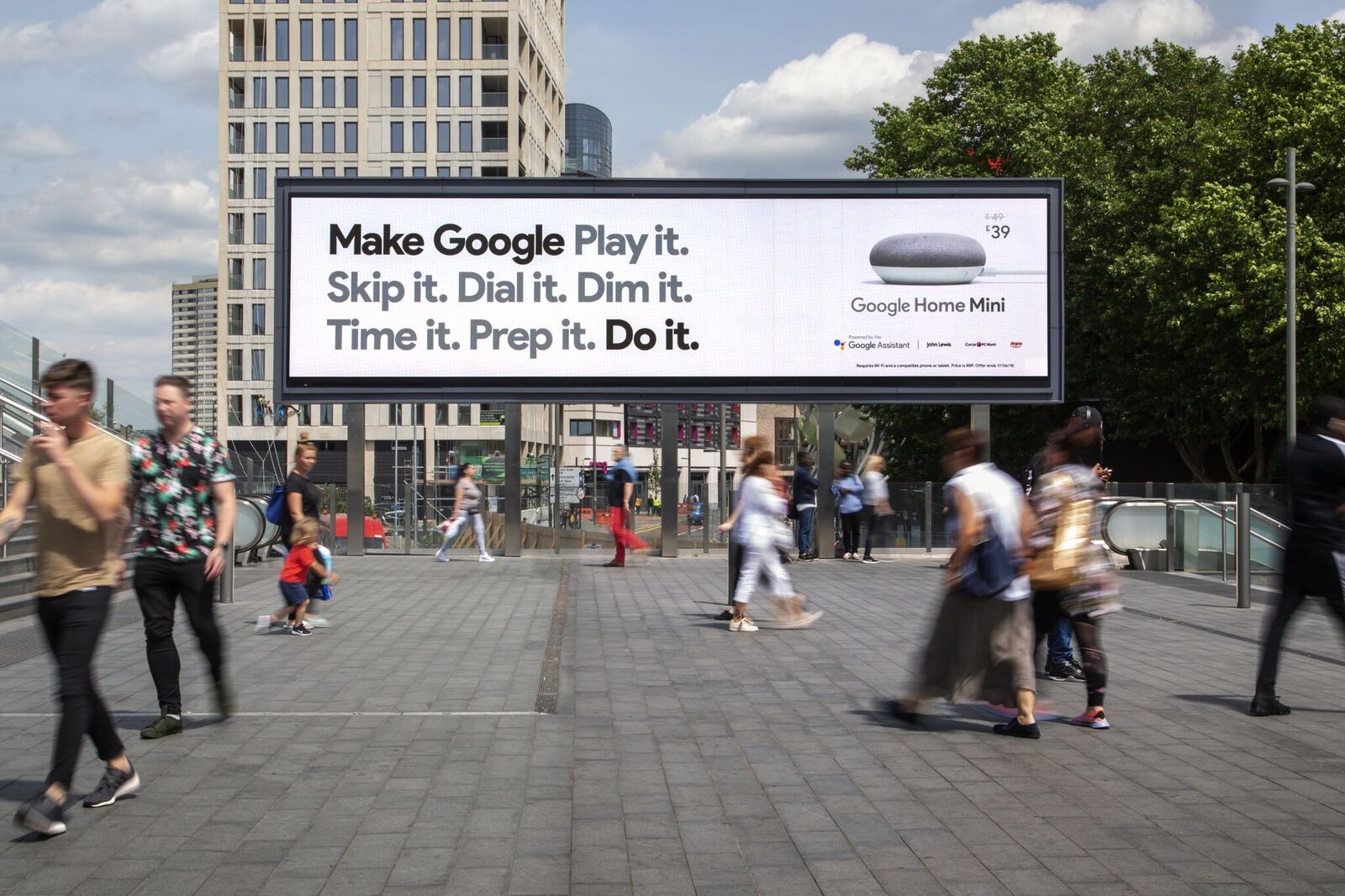 The second creative thread demonstrates Google Assistant’s ability to help with everyday tasks in a Q&A style activation at Old Street Roundabout. Here copy that is linked to time, day, location, and major cultural events such as the World Cup, Wimbledon, and Pride London. It also pulls in local and contextual information such as “Feeling hungry Old Street? or “Can’t find the mythical Shoreditch cash points?” to highlight Google Assistant’s ability to provide location-based relevance. 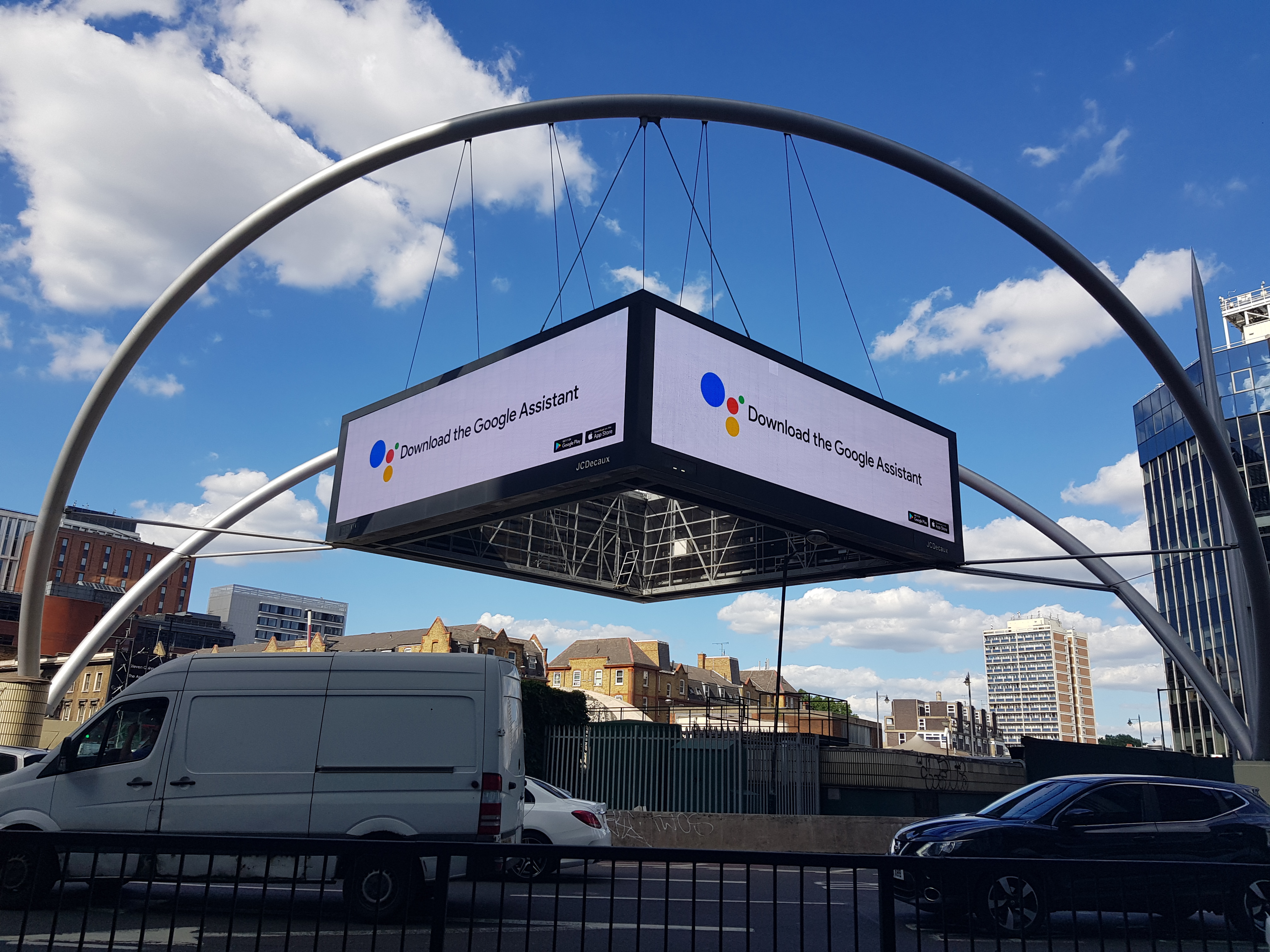 The digital OOH campaign was created by R/GA London and Google UK, with production and delivery by Grand Visual and media planning and buying by Talon and OMD. The digital OOH campaign is part of a broader integrated global campaign that is running across cinema, TV, out-of-home, press, display and social media. The UK version of the “Make Google Do it” TV ad from R/GA also launched earlier this month featuring John Boyega and David Walliams.

Meg Ledger, Client Manager, Talon said: “OOH was the perfect channel to communicate how Google Assistant can be your playful sidekick throughout the day. Working collaboratively with Grand Visual, Google, OMDUK and R/GA we were able to maximize the effect of OOH by deploying clever contextual creative assets to tap into a relevant frame of mind for busy on the go audiences”

Dan Dawson, Chief Creative Technology Officer, Grand Visual, said: “This campaign took over 100 pieces of copy to deliver. By using smart scheduling, Google has created a fresh, timely and engaging campaign that reaches a mass audience and demonstrates just how far the medium has come.”

Grand Visual is an award-winning production company providing creative services for digital OOH. Made up of experts in creative, technology, production, storytelling, and digital marketing, Grand Visual craft compelling stories which maximize the effective use of digital OOH for advertisers and agencies around the globe. For more information visit www.grandvisual.com