Citing the decline in airline passenger traffic due to the COVID-19 pandemic and the rise of streaming news video on mobile phones, Jeff Zucker, CNN President, has shut down the CNN Airport Network effective March 31. The CNN Airport Network, which got its start in 1990, is an ad supported network found in airport terminals’ waiting areas, typically at gates. 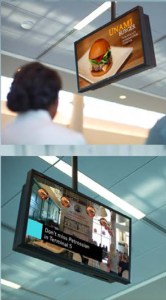 Clearly the content was as good as any content which could possibly be placed over the network. Placement was excellent. One has to believe it is indeed the huge loss of air travel brought on by the virus. The fact that the decision was made to close after a historical 30 year run, speaks as much to the lack of faith and troubling forecasts to the future in airport travel. 30 years is a significant investment to walk away from.

Owned and operated by AT&T’s WarnerMedia through CNN, the service broadcasts news, sports, weather, stock market updates, entertainment, and travel content to airports across the United States. Unnamed sources said the Network was no longer profitable. Approximately two dozen employees based in CNN’s Atlanta headquarters will be affected.

According to the CNN Media Kit, their coverage included 58 Airports, over 2,400 gates and 329 million annual viewers.

It will be interesting to see if any of the ‘traditional’ OOH companies move in to take up the space.