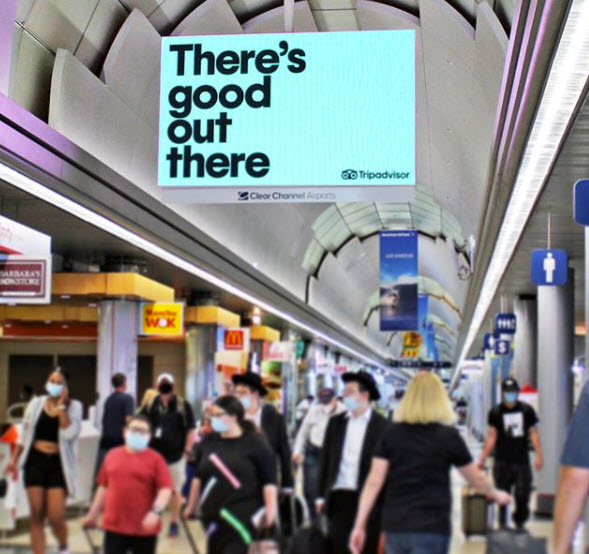 NEW YORK,– Clear Channel Airports (CCA), the Americas-based airports business of Clear Channel Outdoor Holdings, Inc., and leading airport advertising provider in the U.S., today announced a first-in-the-nation rollout of a new audience impressions methodology that provides advertisers a more precise analysis of a consumer’s advertising journey as they traverse an airport. The impressions methodology, pioneered by Geopath, an independent organization that develops the industry-standard and accepted currency for Out-of-Home (OOH) media in the U.S., is being integrated by CCA into the nation’s busiest and most sought-after airports now and into 2021.

This integration represents a hard pivot away from a decades-old methodology that estimated how many times passengers see an ad in an airport. The new methodology marks a shift from measuring campaigns solely by passenger count and toward a greater understanding of audience behavior and a consumer’s likelihood of consuming ad media in an airport.

Moreover, CCA’s investment in this data integration through Geopath revealed that previous estimated impressions delivery for airport advertising underrepresented the true audiences reached and suggests the space was undervalued. In comparing the historic passenger counts in six of the nation’s top airports against the new Geopath audience measurements, the data show airport campaigns are delivering impressions at a much higher rate, and in some cases, up to 8x what was previously reported.

“We believe in the airport media space and our investments in data and innovation are raising the bar on measurement to ensure greater transparency and results for our brand partners,” said Morten Gotterup, president, CCA. “As travel continues to ramp, our advertisers will benefit from these insights by realizing the true reach and effectiveness of their campaigns.

“Moreover, the new independent, third-party validated methodology results in a more qualified level of impressions in each airport and provides brands with a better understanding of campaign reach and frequency. It factors in the placement of each unique media display along with a traveler’s time spent and movements throughout the airport to render overall impressions. The data will become available to CCA’s advertisers through the company’s CCO RADAR suite of campaign planning, amplification and measurement solutions.

“Buyers and sellers of OOH advertising in airports can better justify spending in the channel when there is a unified, apples-to-apples currency across all forms of OOH, DOOH and VOOH,” says Kym Frank, President, Geopath. “We worked with a committee of buyers and sellers to develop a methodology that provides accurate measurement for each unique screen across a multitude of venues that is on par with the data we provide our roadside and transit members.”

“Clear Channel Airports, by rolling out the Geopath methodology across its nationwide network of airports, is raising the bar for audience measurement by responding to the desire for greater transparency and a single accepted currency for airport media,” said Michael Lieberman, CEO of Kinetic US. “The opportunity to evaluate airport media impressions, in a manner aligned with traditional OOH, helps us understand the real reach and value of our campaigns.

“The opportunity to evaluate airport media impressions, in a manner aligned with traditional OOH,” Michael Liberman, CEO Kinetic US

“About Clear Channel Airports
The Company, a brand division of Clear Channel Outdoor Americas, one of the world’s largest outdoor advertising companies, currently operates more than 260 airport programs across the globe and has a presence in 28 of the top 50 U.S. markets with major airports.