Running on more than 350 digital screens in 16 cities, the campaign will be seen by more than 105 million potential voters including key battleground states such as Pennsylvania, North Carolina, Ohio, Virginia, and Georgia.

Orange Barrel Media has partnered with artists Jenny Holzer, Carrie Mae Weems, Jeffrey Gibson, Tomashi Jackson, and more to launch Art for Action in the lead up to the United States November election.

Art for Action is the largest and most geographically diverse public art initiative and non-partisan voter awareness campaign of its kind, running on more than 350 of OBM’s digital large-format screens and pedestrian kiosks in 16 cities and will be seen by more than 105 million potential voters including in key battleground states such as Pennsylvania, North Carolina, Ohio, Virginia, and Georgia.

The project is unique to other artist-driven GOTV campaigns because it is a direct call to action that offers interactive elements to counteract voter suppression, including state-specific registration and voting deadlines that are accessible on OBM’s street-level kiosks. Through a QR code handoff, pedestrians can even register to vote and access resources.

Orange Barrel Media (OBM) announced Art for Action, an artist-driven, non-partisan voter call to action and awareness campaign appearing nationwide across its network of digital billboards and IKE Smart City kiosks in advance of the 2020 United States November election. In partnership with artists and the Wexner Center for the Arts, Art for Action features original works by Jenny Holzer, Carrie Mae Weems, Jeffrey Gibson, and Tomashi Jackson, among others.

The campaign includes voter resources, links, and individual state-specific registration and voting deadlines in sixteen cities across the US, on view through election day on November 3, 2020. OBM is the only outdoor media company initiating, developing, and executing such a large and expansive campaign to help register voters and disseminate information about new voting procedures in a complex political landscape. This project is differentiated from myriad other artist-driven GOTV campaigns because it is a direct call to action that offers citizens meaningful interactive resources to facilitate and improve voter engagement.

The largest and most geographically diverse effort of its kind, Art for Action appears on a total of 350 large format digital screens and IKE Smart City kiosks in Washington, DC; Los Angeles; Boston; Atlanta; Denver; Cleveland; Charlotte, North Carolina; St. Louis; Pittsburgh; Baltimore; San Antonio; Kansas City, Missouri; Columbus, Ohio; Tempe, Arizona; Norfolk, Virginia; and Coral Gables, Florida. The campaign is projected to reach a daily audience of 3.34 million and a total audience of more than 106.7 million adults throughout its run, with messages appearing approximately one time in each minute-long content rotation.
In addition to the artwork components of Art for Action, the campaign developed by OBM displays voter information and individualized registration and voting deadlines for each state. IKE’s software platform and intuitive design allows pedestrians to approach street-level kiosks and use touch screen capabilities to access online and in-person deadlines, and through a QR code handoff, allow pedestrians to register to vote. A real-time countdown clock powered by software developed by IKE Smart City conveys key dates and creates a sense of urgency to engage.

“From the beginning, we have been focused on partnering with the cities we serve, leveraging our powerful platform to improve mobility, equity, and citizen engagement. What better opportunity than this historic election to partner with artists to encourage a dialogue on citizen engagement and to broadcast information and resources to encourage higher voter participation, particularly in many of the states that will determine the outcome of the election,” says Orange Barrel Media CEO, Pete Scantland.

leveraging our powerful platform to improve mobility, equity, and citizen engagement…to encourage higher voter participation,
particularly in many of the states that will determine the outcome of the election,”
says Orange Barrel Media CEO, Pete Scantland.

The artist-driven component of the effort was initiated by Jenny Holzer, long known for her work utilizing digital signage in the public space. Inspired to share new work from her project YOU VOTE developed for the election, she reached out to OBM. Holzer had previously collaborated with OBM on projects that debuted on OBM’s IKE kiosks and large format digital screens in 2019. From there, the effort was broadened to include work by Carrie Mae Weems, Jeffrey Gibson, and Tomashi Jackson, who is currently featured in an exhibition at the Wexner Center for the Arts in Columbus, Ohio.

Partnering with the Wexner Center for the Arts, these artists’ work will appear in all markets, and the museum and OBM have also commissioned seven additional artists to debut on screens in Columbus and Cleveland, Ohio. The local Ohio project is curated by Dionne Custer Edwards, Director of Learning and Public Practice at the Wexner Center for the Arts, and the broader national project is curated by Diana Nawi for OBM. 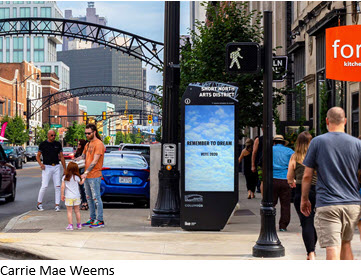 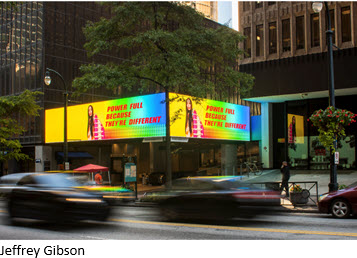 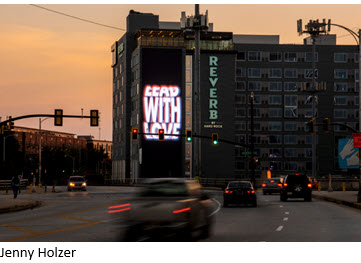 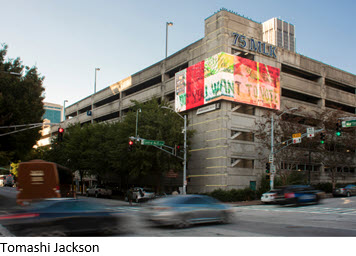 OOH TODAY believes all voices, not just the loudest, must be heard 3341 posts 506 comments

Lamar to Recognize Teachers’ on Billboards in 86 Markets…

Head of World’s Largest Advertising Group to Keynote at WOO…

Delivering the Right Content, to the Right Screens at the Right…

OOH Supports ‘Light Up the Dawn’ this Anzac Day