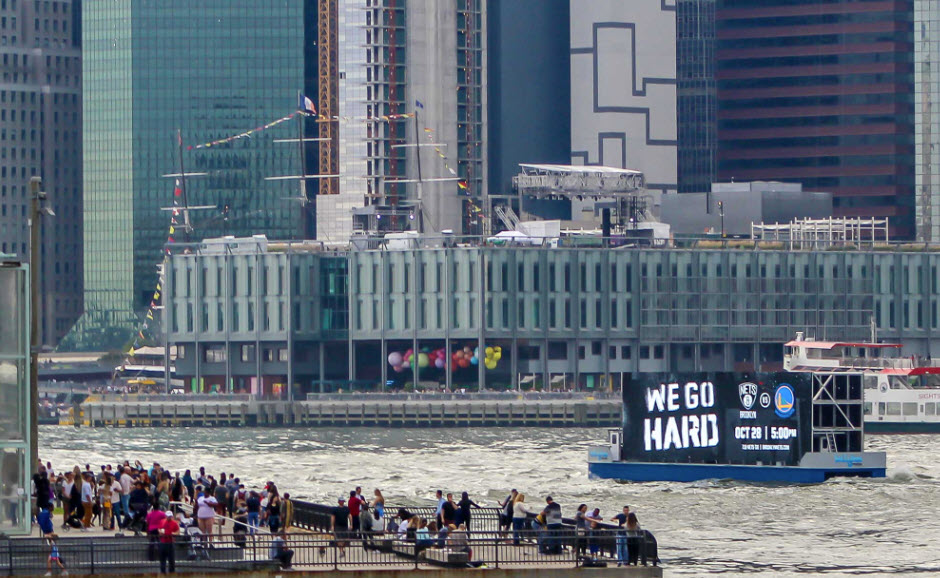 OOH Today publishers note:
We posted the perils of Ballyhoo Media yesterday ⇒Billboard Boats Prohibited by NY State Legislature.  We then spoke with Adam Shapiro, CEO of Ballyhoo, later in the day. The ‘untold story’ Adam shared, initially unbeknownst to us or many others, is all too familiar to similar ‘fights’ land based Out of Home has battled (successfully) over the decades.  It is our position, uneven handedness by gov’t regulation and enforcement with OOH, whether land or sea, is unacceptable. The rhetoric from the city and state of New York, is nearly the same meaningless content, bogus arguments and 11th hour law making so many of us in the Billboard Industry have endured over the years. We wish Ballyhoo Media well and encourage advertisers continued support. We applaud the innovative OOH format they have brought to Outdoor Advertising. Ballyhoo did not supply any photos or even website address for the story, choosing a higher road to share without promotion. We added the pictures from their website to maintain our two photo policy and we really find their creative executions outstanding.

Ballyhoo Media is an outdoor digital media company based on the water. Its vessel-based billboards capture people in ways that other forms of advertising cannot, taking coastal advertising out of the air and into the sea. It’s a new and innovative concept that offers better connections with the audience, tells more compelling stories, and has applications far beyond traditional corporate advertising. It’s a form of advertising that’s growing across the nation and in many ways, Ballyhoo is pioneering the way forward. But its not been an easy path to forge.  Despite its meteoric growth and success, the company has endured significant unfair scrutiny in New York.

Ballyhoo Media launched in Miami three years ago, and after some initial public skepticism,  they won over their critics and built partnerships with the local community. Today it’s viewed as an invaluable resource, hosting events like movie nights on the beach and partnering with authorities to promote safety on the waterways.  Last year, Ballyhoo teamed up with the local government to throw Miami’s biggest World Cup Watch Party and are even partnering with the NFL for the upcoming Super Bowl hosted in Miami. During Art Basel, Ballyhoo collaborated with world-renowned artists to turn the platform into a modern art exhibit. It even played a role in Presidential politics, appearing in the background during NBC’s coverage of the first Democratic Debate Presidential on (today) June 25th.

With its success in Miami, Ballyhoo looked to expand and saw the New York City area as the best market to do so. Before moving to the Big Apple, Ballyhoo hired legal professionals to ensure compliance with all local and state laws including maritime and zoning laws. They obtained the necessary licenses, and after receiving the legal green light, expanded in New York/New Jersey in October 2018. Ballyhoo expected some initial skepticism, just like in Miami, but were prepared to prove themselves as valuable assets to New York’s waterfront. Their marketing plan was similar to that which brought them success in Miami. In addition to corporate advertising, they hoped to organize outdoor movie nights at waterfront parks, Yankee or Mets games at waterfront bars/restaurants, wedding proposals in front of the Statue of Liberty, and countless other opportunities.

For nearly three months, Ballyhoo operated daily, often greeted with smiles, waves, and pictures from passing boaters. It wasn’t until January that Ballyhoo received its first letter from the City demanding they halt operations. Ballyhoo responded by explaining that they were not in violation of any laws and invited the City to discuss further. The City never responded.

Shortly thereafter, a handful of vocal critics began attacking the business in small online publications and on social media. In response, the City filed a lawsuit against Ballyhoo seeking to halt the company’s operations.  But only weeks later, the judge in that lawsuit ruled that Ballyhoo had the right to operate in the harbor stating two key conditions:

Having prevailed over the City in court, Ballyhoo thought the fight was over, but it wasn’t. Weeks after the judge’s ruling, two State legislators from Manhattan introduced a bill to ban Ballyhoo, and all businesses like it, from operating in New York. That bill passed both houses of the legislature last week in the dead of the night, right before the session was scheduled to adjourn. The sponsors justified the legislation by saying that Ballyhoo Media is “potentially unsafe to boaters” and added that their intention is keep New York’s waterways free of advertising. However, Ballyhoo has been operating for three years in Miami and nine months in New York with no reported safety hazards. Additionally, New York’s waterways are far from ad free with aerials flying over the Hudson regularly and with almost every New York ferry completely wrapped with advertising.

As it stands today, Ballyhoo is still operating in accordance with the Judge’s ruling. There is still hope for Ballyhoo as New York’s Governor Andrew Cuomo can veto the legislation and prevent the state from taking the extraordinary step of banning a single company from operating in New York based on the whims of a small cohort of critics. Ballyhoo’s story serves as a cautionary tale of how an innovative idea can grow into a successful business and then run into barriers from government.

The Suspense Won’t Kill You, Texting Will