“I am not my stereotype” 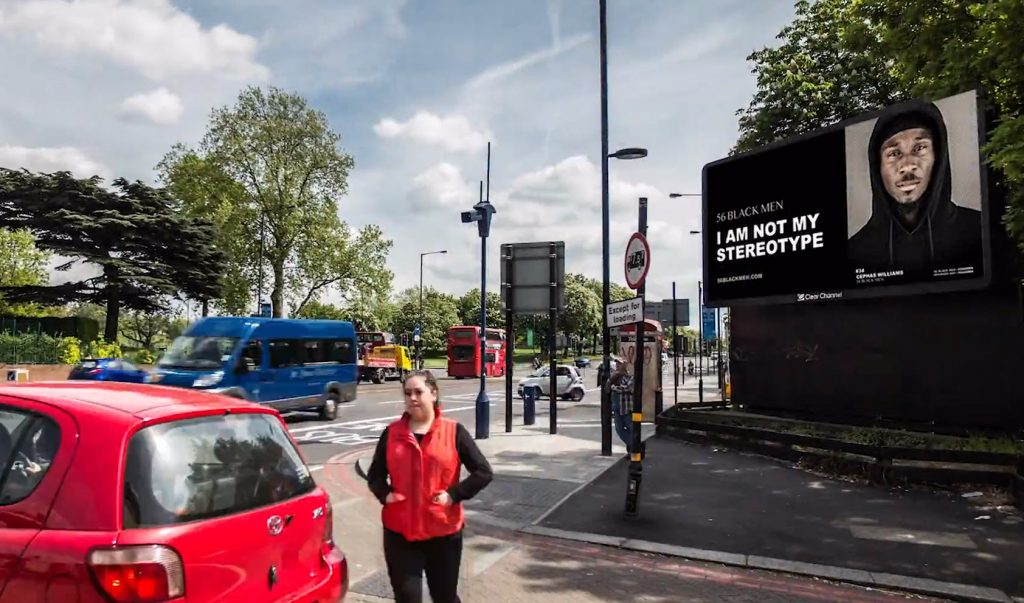 Founder and 56 Black Men project curator, Cephas Williams saw a report on Sky News, detailing that 56 black people were murdered in London in 2018.

His frustration at the article and the singular lens that the black male experience is seen through in the media became the catalyst for his vision to change the narrative.

It was time to take back ownership of the story around what black men are doing and how they are seen. Time to challenge lazy and dangerous stereotypes of black men in the media. And so 56 Black Men was born.

The tagline of the striking photography series is “I am not my stereotype”, boldly displayed alongside the 56 portraits of black men all wearing the same black hoody. Among the men photographed are Sky’s football presenter Samuel Obaseki, business managers, fathers, writers, electricians, Uber drivers, actors, and of course, Tottenham MP David Lammy. The content, originally created for social media, flips the narrative around the “clichéd image of a black man wearing a hoody” to show the depth of the black male experience.

The project reclaims imagery of black men as either perpetrators or victims of knife crime across mainstream media platforms. The response to the series has been incredible and has become a movement for positive social change. Williams has had an overwhelming response appearing on multiple news platforms to discuss the powerful project.

Caroline Forbes, Specialist Partner at Clear Channel, was so inspired by Cephas and the campaign she reached out to see how Clear Channel could help. Utilizing the power and scale of Clear Channel’s digital Out of Home portfolio, the message has been amplified across the length and breadth of the UK. Adding to the momentum and impact of the campaign, social media posts of the posters have appeared from London, Glagsow, Manchester and beyond – #56BlackMen | #IAmNotMyStereotype.