Where are the Political OOH Dollars?

OOH Impacts Elections
or Does it?

On the Thursday, just a day after Hurricane Michael made landfall, Florida’s gubernatorial candidates and their parties added a collective 20 percent—nearly $27 million—in TV ad buys to their campaign-ad schedules, according to Ad Age Datacenter, which used data from Kantar Media’s CMAG (Campaign Media Analysis Group).  That is the day after the hurricane when an estimated 400,000 Floridians where without power and many more fled the State for safety.  Yet the TV commercials kept playing.
The buys kept coming.

TV and radio spending for both major parties in the Florida governor’s race is at $159 million.  For the US Senate seat in Florida, the broadcast cumulative and advance spend is $140.5 million.  The combined TV-radio ad spending for both offices is, as of Friday October 12th, is just about $300 million, per Ad Age Datacenter.

Where is the OOH?  I am sure OOH received some political buys for Florida but nothing near the $300 million and one would think the a greater portion of the $27 million ‘a day after,’ would have been better spent in OOH.

Do what Out of Home does so well—  Get into the consumers heads early and often. 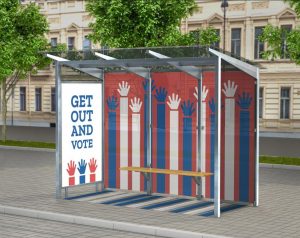 If we aren’t selling the space, use the unsold opportunities to promote voting.  As an Industry we spend a tremendous amount of resources on charitable causes in our communities. As we should be.  So what is more important than voting?

What if a market who provided significant space to getting out the vote, could show a substantive increase in voter participation?

Use your public service space to encourage voting.  Get out the vote.  Not just on election day.
Get into the heads of the electorate, early and often.

Get into the heads of the electorate, early and often.

Daktronics reminds us the election season is upon us. Advertising in #OOH plays a critical role in political campaigns. Daktronics election content helps you sell advertising slots while also serving the public. This is a chance for you to use the high election anticipation to launch your own exciting campaign.

Use Daktronics content templates to deliver 4 messages for this OOH Election Season: