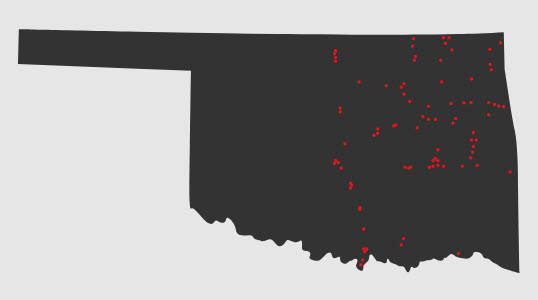 TULSA, Okla., Feb. 12, 2019 — As businesses prepare their marketing plan for the new year, one local billboard company is expanding their product inventory with 144 new faces with 36 new billboard locations, across Oklahoma, located primarily in Green Country, (sometimes referred to as Northeast Oklahoma, is the northeastern portion of the U.S. state of Oklahoma, which lies west of the northern half of Arkansas, the southwestern corner of Missouri, and south of Kansas). Stokely Outdoor Advertising has expanded their #OOH footprint to include 17 new cities with major roadway access including Ada, Ft. Gibson, Durant, Guymon, Atoka, Broken Bow, Chickasha, Anadarko, Duncan, Ardmore, Blackwell, Woodward, Checotah, Muskogee, Tahlequah and Sapulpa. The new billboard locations can be utilized by businesses in any industry, they are great assets for casinos and gas stations to reach among tribal lands.

Bill and Sarah Stokely started Stokely in 1978 after Bill had worked for Donrey Outdoor for eight years. Bill’s daughter Shelley joined the company in 1990.  Bill’s son, Sam, in 2008, he and his wife, Jill, began building their own outdoor company, Big Time Billboards. Stokely Outdoor and Big Time Billboards staff office together and support one another in sales, art design and customer service. It is a great Family Outdoor Advertising story!

Although Stokely Outdoor has already provided billboard locations along many desirable roadways in the Tulsa area, the company understands the importance of expanding beyond the local area to increase exposure for businesses within the state. To do this, all new billboard locations are varied to provide a broader reach across Oklahoma including Green Country and beyond. Stokely now maintains over 480 traditional and LED billboards across the state of Oklahoma.

For an in-depth look at the new locations that are available, visit Stokely Outdoor Advertising.

Supporting the Community with OOH

Who is Behind These Mysterious Valentine’s Day “Love” Billboards?