The ‘Yahoo billboard’ has been around for the last 20 years, and despite the stories of its early demise, it appears it may be sticking around after all.

The Yahoo billboard owned by Clear Channel Outdoor (CCO) in San Francisco, was reported and promoted as available by SF sales office of CCO back in December last year, Yahoo Billboard, after 20 years Yields.
It now appears to be coming to life again. The San Francisco Weekly reported it is being dismantled and rumored via Yahoo, it may be returning.

Lot’s of what ifs, but who would be surprised?  When a company earns the reputation of a particular billboard location as ‘Brand X’s billboard’ or this case, ‘Yahoo’s billboard,’ that kind of earned stature is difficult to just, give up.

‘Yahoo’s billboard,’ that kind of earned stature is difficult to just, give up.

Yahoo is too savvy to toss aside the iconic location.  When we heard they were not renewing the space, we could not believe it at the time. Now according to SF Weekly and various social media comments, it appears, albeit with a new image and face, they are staying put.

See the video then the photo below.

If you watched the video closely, you will see the following message below for a millisecond. Yahoo is sticking around?  Looks like it.  Bluff on CCO’s part to convince Yahoo they were going to sell it?  Perhaps to leverage the pricing?  Whatever brought the ‘off again, on again’ circumstances, we are happy Yahoo is back!  Or are they?  Stay tuned 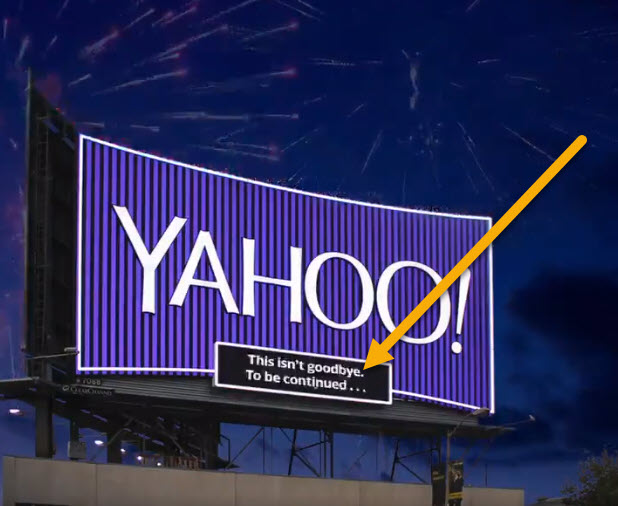 Clear Channel Outdoor did not respond to our inquiry by press time.

In Baton Rouge, They Love Their Billboards & Basketball

What Clear Channel is Loving