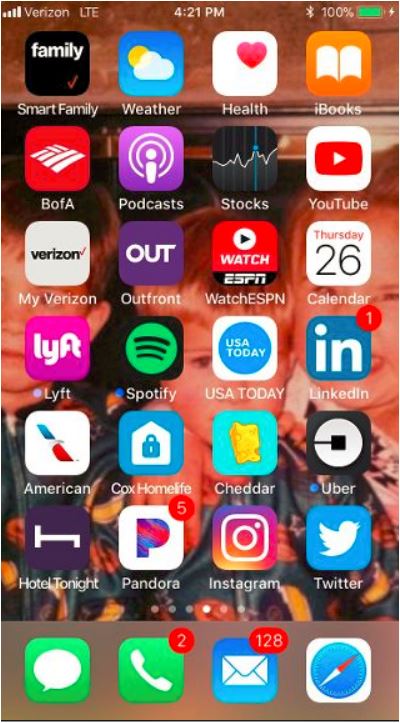 What’s on your phone?

Dave’s experience in Outdoor Advertising began as a crew member during summer employment while in high school and college. This lead him to a path in media for over 31 years in Sales, Sales Management, General Management, and in his current role as Sr VP. Originally hired by Outdoor Systems in 1986, Dave has gained market knowledge living in Phoenix, Tucson, Louisville, Atlanta, and is now back to his hometown of Phoenix, AZ.

A graduate of The University of Arizona, and a football letterman with a BA in Business. He and his wife have 3 children.  Dave enjoys skiing, rock climbing, and fishing and is a self-proclaimed jack of all trades, master of none.

What is your most-used app?
American Airlines/Uber/Twitter/OUT.

How many LinkedIn connections?
2k ish

Person you FaceTime the most?
My son at TX A&M

Craziest place you left your phone behind?
Been fairly good about not leaving it places, but would have to say inside the refrigerator

Alarm settings?
Set only for meetings and calls. I hate to be late !

Number of contacts in the phone?
1500

App you wish someone would invent?
One that could put a “chill” in the summer heat about to beat down on those of us who live in Phoenix

Most-surprising app you depend on or use often?
Bank of America app.. ( see above comment “son in college”)

Are there times you try to stay off your phone entirely?
Not really

At what battery percentage do you feel compelled to charge your phone?
iPhone Plus Apple battery pack are great…  so only charge at night

Funniest Text message?
No comment..  but it was funny !!

Number of unread emails
– really try to get to these so not too bad..  125 or so

Most listened to music track
– depends on the day/time etc.  Like so many.

Home screen Image?
Family, nothing more important than them!

OOH Phone Life is a new OOH Today feature for fun and familiarity.  It is a near exact format as from The Wall Street Journal Magazine. OOH Today features women and men who define Outdoor Advertising adding a personal dimension.  Relationships are still an important part of OOH and is an Industry where the people in the organization are as important as the company itself.  Phone Life is an opportunity to share more.

T Minus 10 Count Down to Conference