What You Need to Know About Cannabis Advertising in 2020

Do things to stand out! 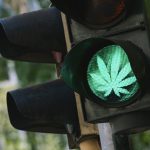 What You Need to Know About
Cannabis Advertising in 2020

The past few years, cannabis advertising has been a brave new world for marijuana sellers and advertising vendors alike, who up until the end of 2019 were still testing the waters on what’s legal, what isn’t, and when to toe the line. All that will change in 2020.

With the increasingly widespread adoption of cannabis legalization across the country, states have become more focused on rulemaking. Many have adopted laws that guide marijuana advertising. Others have them under consideration.

Up until now, most states have been feeling their way along when it comes to marijuana advertising. There were no precedents to support decisions, which made it easy for states and advertisers to second-guess things. Now, with more guidelines being published and established criteria to draw on, marijuana advertising guidelines will become less nebulous.

In the coming year, you will see greater certainty in the courts over cannabis laws and more forceful decisions by local authorities regarding the legality of billboards and other outdoor marijuana advertising. 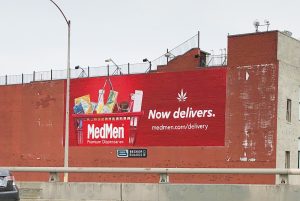 Will these decisions be more lenient toward cannabis sellers? That remains to be seen. So far, many states have given limited leeway as they determine how receptive residents are to such advertising. We could see that loosen as marijuana ads become less of an event and more of an everyday occurrence, becoming normalized in the same way beer ads on television have become.

This increasing level of comfort with cannabis ads coupled with greater institutional oversight will be the most notable trend in marijuana advertising in 2020. Here are six more:

Those wildly optimistic forecasts for the medical and recreational cannabis markets that you saw earlier may not have been wildly optimistic enough. The market for legal sales will hit $25 billion by 2025, with a compound annual growth rate of 14 percent. To put that expansion in perspective, the insanely popular app TikTok is growing at a rate of … 6 percent.

Marijuana’s sweet spot is adults 25-44, who make up almost half of users. These are people who have money to burn, so it’s natural advertisers will be rabid to reach them. They’re ready to spend, and they want the product

2. Local Advertising Is Where It’s At

Because of all the confusing legalities surrounding pot — it remains illegal at the federal level, and advertisers have run into issues advertising cannabis in states where it is still outlawed—means hyperlocal, hyperfocused advertising offers the safest approach.

Marijuana sellers are doing a booming business. They don’t want to get caught up in fights beyond the municipality level over what type of advertising they can run.

This is one reason outdoor advertising will stay more popular. You target it to a narrow group, within a city or on a highway where it’s legal. You don’t have to worry about if you’re reaching people who can’t buy your product, which is a huge concern for online marketing of marijuana. 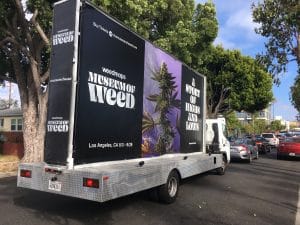 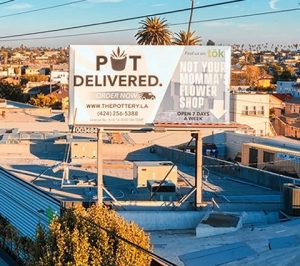 To this point, marijuana marketers have been careful with the images they use for marketing. Many states don’t allow use of imagery that would appeal to young people, such as cartoons or animals. Advertisers have mainly stuck with neutral images or pictures of the weed plant, where it’s allowed.

But for the normalization the industry is hoping for to occur, advertisements will need to begin using more faces, show more people enjoying cannabis in different forms (likely not as much smoking but perhaps some implied edibles), and generally humanizing the effects of the drug. 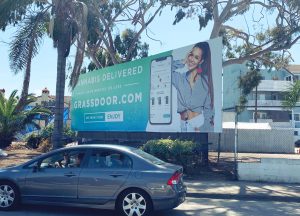 This may be the trickiest aspect of 2020 trends. You can expect states to fight this, citing tobacco laws as a precedent. Yet marijuana sellers really need this marketing tactic to work. They need views of people using marijuana to become commonplace to advance the focus on the product and differentiate what they sell. This way the focus moves from “OMG, it’s a pot ad!” to “where can I find the right cannabis for me,” a much more effective and useful approach to advertising. (What it’s really all about, actually.)

You don’t need a sensitive nose to know people light up at concerts and other public places. Marijuana sellers want to reach these people where they toke up. Look in 2020 for more advertising activations at events and destinations that are not marijuana-focused as normalization expands.

For instance, sending brand ambassadors to events like Hempcon will become more of afterthought — you already know what you’re getting there, people have sampled the product. Advertising will expand to other festivals, like Northern Nights, which last year hosted a “cannabis-infused wellness experience.”

With the greater legalization of cannabis comes greater need for education, and marijuana sellers are the perfect purveyors of such knowledge. They understand their products and their benefits, and their advertising should focus on conveying these advantages. Topics sellers could explore include:

Educating people through marketing has other advantages too. It will make a business appear more “legitimate,” at a time when that’s valuable. The general public wants to give business to legit companies. They are already wary of some of the claims being attached to CBD oil, so giving them solid, reliable information could make the difference in a sale.

6. Creativity Will Always Win the Day

Up until now, most cannabis advertising has been fairly conservative, and that’s understandable. This is new territory, and startup brands don’t want to waste money on guerilla marketing techniques that could get them in trouble or be misconstrued.

Now that cannabis’ legality is more established, though — Colorado voted to legalize it seven (!) years ago — it’s time to start taking chances. Do things to stand out. Show how creative and smart and fun this type of advertising should be for a product that’s unlike anything else on the market.

That’s something we specialize in, actually, so if you want to talk about innovative cannabis advertising ideas, contact us today. 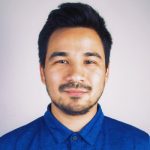 Rodolfo Queiroz is an expert in the Out-of-Home world and is based out of Los Angeles, CA currently working at DASH TWO.

Lucking Out with OOH – Lotteries