We hope everyone is having a safe start to 2021, and want to wish the best to everyone across the OOH industry in the new year!

For today’s analysis, let’s head northeast from New York, which we covered last week, and look at the eighth largest DMA in the country; Boston. With over 12,000 OOH assets audited within this market from 43 Geopath members, it will be interesting to see what advertisers are taking advantage of the 1.1 billion impressions generated from this inventory every week!

With that said, let’s take a look at who was spending during Q2!  See below for the top ten spenders in the DMA for the months of April through June. 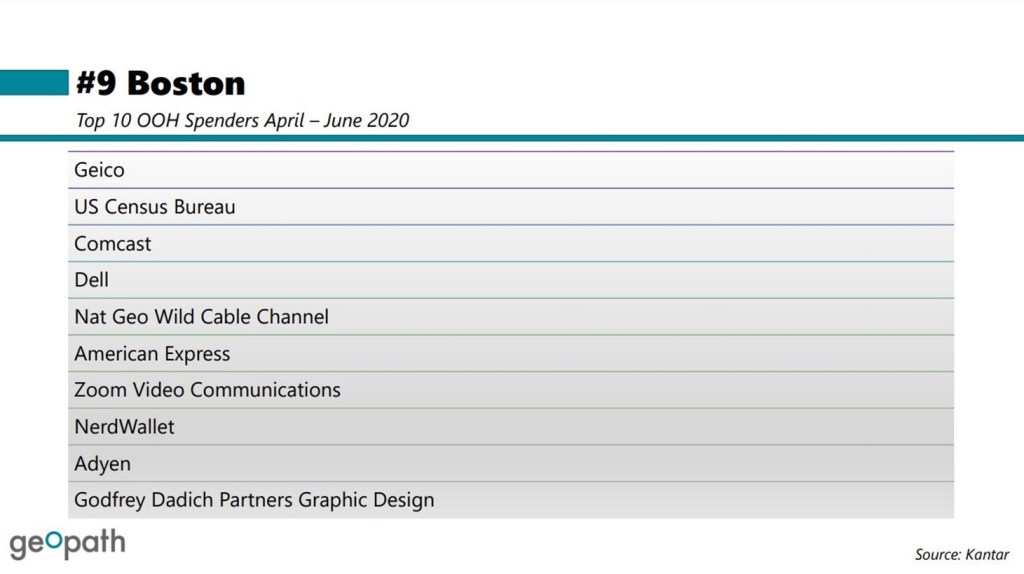 In Q2, brands spending within the Boston DMA were predominantly from the Insurance, government, communications, and financial sectors. These included, but were not limited to, organizations such as the Geico, US Census Bureau, Comcast, and American Express.

However, third quarter spending reports from Kantar indicate shifts in not only the advertisers, but also the sectors represented during this period. See below for the top OOH spenders from July to the end of September. 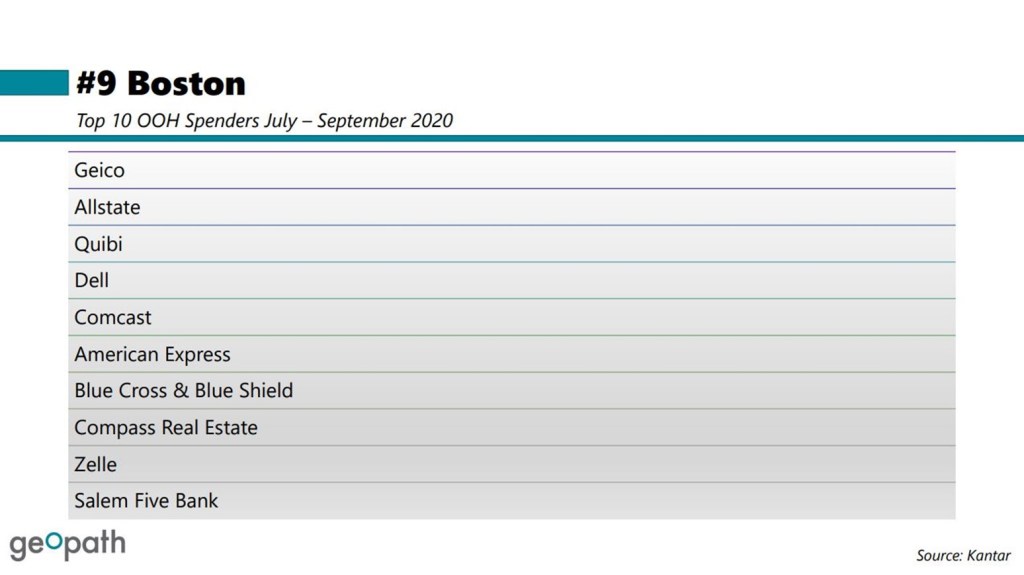 Compared to other markets, Boston experienced a variety of changes in both order, and new additions to the top ten list. Although Geico continued to hold the top position, another brand from the insurance sector appeared on the list for the quarter in the third quarter. Allstate, which had previously not been listed, took the second spot which had been held by the US Census Bureau.

While a number of companies fell off the list in Q3, their respective sectors continued to be represented by new additions. For instance, although NerdWallet and Ayden from the financial sector did not make the list in Q3, Zelle and Salem Five Bank are now included. Other new additions came from the Media, Insurance, and real estate sectors, with Quibi, Blue Cross & Blue Shield, Compass Real Estate, all spending enough in OOH to be included in the top ten spenders list.

With the release of Kantar advertising spend data for Q3, the Geopath team compiled the top ten advertisers for other DMAs across the country into a research report. This report, as well as previous OOH spending reports for your market and other additional research resources, can be accessed by members within the GeekOUT Library by using their current Geopath credentials.